When one family refused to get along with the Powers That Be and shut themselves in their fortified home, the overlord or King sent in the cavalry to flush them out.  Remember, fortified homes, also known as castles, weren’t built of straw or mud. One simply couldn’t knock on the door and walk inside.

The homes of noblemen originally started out as motte & bailey fortresses. After the Normans invaded England in 1066, King William I (William the Conqueror) gradually replaced (or added) the motte & bailey structures with stone castles.  Cities, on the other hand, were a different story. A city may have had a protective wall around its perimeter.

A siege is the process where an opposing force encircles an occupied & fortified structure for an extended period, usually by means of bombardment and blockade. The time frame for the end of a siege varied from a few days to almost a year. In one famous incident, John Marshall had a problem with King Stephen in 1152. When the King arrived to discuss the issue, along with his army, John gave his five year old son, William (the famous Sir William Marshall) as a hostage. The negotiations turned sour. Sources vary next as to whether the boy was dangled over a wall or placed in a catapult cup. Either way, John Marshall supposedly yelled back to King Stephen that he 'still possessed the hammer and balls to make another son'...making him the leading candidate for father of the year.

Motte & bailey keeps were built up high on a hill. The fortress was typically made out of the regional materials available. There may have been a second hill down from the first, surrounded by another wall. The fortress up high gave the occupants a clear view of any persons approaching; an important fact during wartime. An example of a siege that worked against this type of structure happened in 1092. Duke William of Normandy had come to power after his father died. Not all of the barons were pleased to have the bastard son of Robert as their overlord.

One man in particular, Guy of Burgundy, retreated to his home at Brionne. Guy secured his fortress, knowing Duke William would have to act to prove he was a strong leader. As expected, William showed up. The Duke had two castles quickly built on both sides of the Risle River. The wily Duke also had wooden towers constructed alongside the fortresses.  This allowed his men to be protected while also allowing him an excellent view of Guy’s activities. William had his archers shoot fire arrows over Brionne’s walls. This siege went on until Guy of Burgundy surrendered, in either late 1049 or early 1050 (the accounts vary).

Stone castles required more ingenuity. Stone didn’t catch fire, but the items on the other side of the wall (wood structures in the bailey, straw, people, and livestock) did. Men and animals could be killed by projective objects. Sieges called for a different plan.

Castle defenses were built to withstand an extended assault. First, the location where the structure was built upon was important. Castles with two or three sides on high ground, with a sharp drop-off or on water, made for better defense compared to a castle on flat or low ground or next to a forest. Smart nobles cut back covering vegetation & trees, to allow for their guard to spot approaching hostiles. 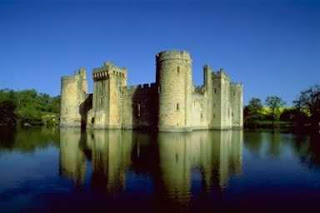 Outside obstacles were set up in advance. Moats or trenches would hamper the invading men from getting to the walls. Pits with spikes inside were dug and then covered & disguised with the hope of catching men unaware. Pitch might be spread out in certain areas, left unlit until the opposing army made its move. The castle archers would then shoot fire arrows, setting the pitch on fire.

Having entrances through a gatehouse was another means of defense. The gatehouse might have murder holes which were openings which allowed boiling hot liquids to be poured on top of invaders. The portcullis, or metal barrier, could be raised or lowered according to the threat level. A portcullis was not foolproof and could be broken by enemies using a battering ram. 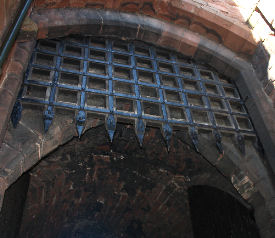 The keep walls were built thick and tall, in order to stand repeated bombardment. Walls may have had arrow loops, which allowed archers to shoot at the men outside the protected area. If the castle walls were crenellated, (which meant the wall would be flat for a section then it would go a block section higher and then repeated the pattern all around the wall)castle defenders could shoot arrows or throw items from the wall one minute and duck behind the higher part of the wall the next.

Sappers, or miners, would select what they believed were weak sections of the keep walls and dig holes. The intent was to tunnel under the wall and gain access. The big problem with the sappers work was keeping the tunnel from collapsing or being killed from falling pieces of the wall.

Castle sieges changed when massive weapons were developed. The trebuchet was a projectile machine which threw an object by a lever. Objects were thrown a great distance with a large amount of force. A new type of position, the siege engineer was born to handle these machines.

The giant crossbow was exactly what it sounds like. This device was meant to be used against castle personnel, the not structure.

The siege-tower was built on the site. The wooden structure was pushed up against the castle wall to allow the opponents to get up to the top of the castle walls. Men were vulnerable while climbing up the tower, and could be brought down by falling objects, arrows, and hot or burning liquids.

The ballista had been around for centuries before the medieval lords adopted it for siege use.  It worked on a torsion method, using a rope that twisted and untwisted to power the projected. This weapon was similar to the Giant Crossbow, only much bigger.

Along the same principle as the ballista, the onager hurled objects. Whether the engineer placed a boulder or collection of other items placed in a sling or cup, a great distance. The force was enough to weaken a wall with repeated blows.

The mangonel was used to throw objects against the wall of over into the bailey. The cup held the projectile, which was launched when the tension was released.

A battering ram was a solid object suspended from a frame which was repeatedly swung back & forth, impacting the wall or gate when it came forward. Battering Rams could also be carried by men.

A mantlet was a huge shield built to protect soldiers and siege weapons as they approached the castle. It was also used as a position of cover for archers.

Sieges were long-term events. The purpose of a siege was to wait the residents out, cutting off communications, food, and water. As the opposing force marched towards the castle, local villagers would often run towards the keep, bringing their precious belongings and possibly a few livestock. The gates would be closed and locked. Food would be rationed; the amount lasted according to what was in the stores. It was not unheard of for enemy forces to compromise water sources serving the keep. Carcasses of dead livestock were thrown over the walls in extreme cases, with the intention of forcing the occupants out.

Any leader who started a siege had to be willing to wait it out as long as necessary. In Lisbon, on 1rst of July 1147, an army of Crusaders set up camp outside of the walled city. The Crusaders spilt their forces: Normans took the west side, German & Flemish the east, and, the Portuguese the north. After multiple failed attempts at placing a siege tower against the wall, mining under the wall, and using trebuchets, the army held back. On the 21rst of October, they tried one last attempt with a combination of a mantlet and siege tower. Four months of bombarding the city had taken its toll. The residents finally realized the Crusaders weren’t giving up. Without a chance of help, Lisbon surrendered.

Another siege of note was that of Chateau-Gaillard in Normandy in 1203. Gaillard was built in a concentric pattern with water on two sides. The approach to Chateau-Gaillard starts by crossing a bridge over a ditch. The visitor must pass through the first gatehouse and up a hill to a second gatehouse and finally to the third. Each of the openings is higher than the other. King Phillip wanted the castle back n French hands. He brought his men to the lands surrounding the keep, setting up a camp. 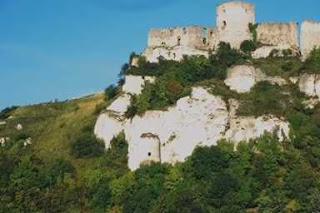 Phillip had the ditch filled in first, and then put boats in the ditch to replace the bridge. Next, King Phillip had his men set up the siege engines and told them to start bombarding the walls. He also had the ballistas aiming for those expelled from the keep. It seems the lord wanted to hold out as long as possible, so he kicked out the villagers to stretch out his food supplies. When King John was informed of the siege, he arrived on shore and attacked the local area, hoping to draw off King Phillip.

It didn’t work. Meanwhile, Phillip’s forces made it over the first defensive wall. Sappers kept digging, using with bridge as a cover. The inner keep was breached on March of 1204. The men made a difficult decision, surrendering to King Phillip rather than dying. It was a pivotal moment for the Plantagenet House – King John was ruling in lieu of Richard who was in the Holy Lands – which sparked the fire leading to the French reclaiming most of their lands in Normandy.

To get an idea of siege warfare, watch “The Kingdom of Heaven” which was given good reviews for its accurate depiction of the siege of Jerusalem. Another example to see, although it is a fantasy movie, is the “Return of the King”. Tolkien’s third part of the trilogy shows both bombarding weapons and mantlets utilized.

For further reading on the subject:

Stay safe out there
Posted by Greycliffs Chronicles at Wednesday, November 07, 2012