Living or dying with honor: the Samurai Warrior

“Fate is in Heaven, the armor is on the breast, success is with the legs. Go to the battlefield firmly confident of victory, and you will come home with no wounds whatever. Engage in combat fully determined to die and you will be alive; wish to survive in the battle and you will surely meet death. When you leave the house determined not to see it again you will come home safely; when you have any thought of returning you will not return. You may not be in the wrong to think that the world is always subject to change, but the warrior must not entertain this way of thinking, for his fate is always determined.” 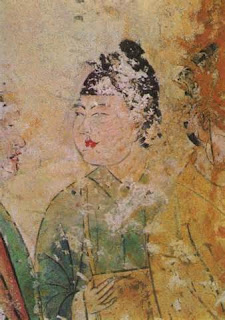 What is a Samurai? In his book, Samurai: the World of the Warrior, noted medieval expert Steven Turnbull defines a Samurai as “those who serve”.  The first official mention of Samurai was in the tenth century. To understand the Samurai culture, a quick review of Japanese history is necessary


The fifth century saw Japanese infantry travelling to Korea to allies with the Paekche kingdom. The Japanese army was defeated by the Koguryo cavalry. The ancient clans were called uji and the strongest was the Yamato family. Learning from their Korean opponent, the Japanese took to the saddle and within a century the Yamato clan turned the table on the Koreans. Initially, the armies swelled their ranks by conscription but gradually landowners were granted commissions by the government. The warlords were, in essence, supported by the government.  Leading their men, these early cavalry were excellent archers and the beginning of the Samurai.

The time period between the eighth and the twelfth centuries is referred to as the Heian Period. The royal family, or the Imperial House, was more of a figurehead with the true power being held by local warlords.


By the eleventh century, the Minamoto & Taira clans had emerged as the dominant families. Clans close to the ruling house had political clout. These two houses, once allies, found themselves on both sides during the  Hogen Rebellion of 1156.  Four years later, the clans became enemies when the Imperial House succession came into play as part of the Heiji Rebellion. It seems Prince Mochihito, the second son of the Cloistered Emperor Go-Shirakawa and Antoku (a mere 8 years old), reigning Emperor & grandson of Kiyomori, leader of the Taira both claimed the throne. Which side began the conflict is uncertain but the Minamoto came out ahead. Poor little Prince Antoku drowned when his mother jumped in the ocean (his mother survived).


Feelings festered and once the survivors of the Hogen massacre grew up they decided to take revenge. The Gempei War started in 1180. At Ichi no tani & Dan no Ura, the fighting started. The series of battles is noteworthy for a number of reasons: first, the sheer number of heroic acts is still remembered in Japanese history; it was a major point of Samurai culture, especially loyalty to one’s lord; the tradition of ritual suicide was especially prevalent during these conflicts; and, the end the wars marked the first time a Samurai leader took the permanent rank as military dictator and with it the title of Shogun. Prior to this point, Shogun had been bestowed as a temporary title to Samurai leaders who had been appointed to deal with any rebellions against the Imperial Throne.


The fight at Dan no Ura involved a sea battle. Initially, the Taira had the edge, but when the tides changed and one of their own, Miura Yoshizumi,  turned traitor and attacked his own clan’s ships, the Minamoto started winning. During the fighting, the Sacred Sword was lost; fortunately, the wooden casket holding the Sacred Gem was recovered as it floated on the waves. Even divers sent to search below the waters after the battle couldn’t find the treasured regalia. They did find the Heike crab, whose shell has a very unique configuration. On its’ underside it has what appears to be a face of a Samurai warrior. 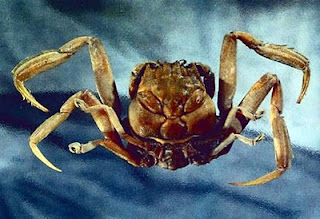 Minamoto Yoritomo was the first Shogun upon the cessation of the Gempei War. His House ruled until the Hojo clan overthrew the Taira clan. The Hojo’s took the Shogun title but out of respect for tradition, called themselves Regents instead of Emperors.
A Samurai wore a kimono secured by an obi (belt), a fundoshi (loincloth, tabi (socks), waraji (sandals) or geta (clogs). Kappa (raincoats) protected the men from the elements. Clothing material depended upon the ranking of the wearer. Sword or daggers were often thrust through the obi for easy access. The names of the body armor are shown on the illustration below. 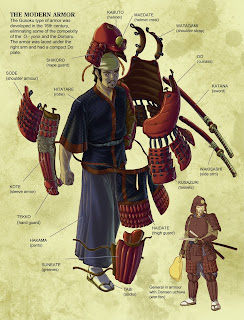 In the fourteenth century, Japan was targeted by Mongols from the East. The Mongol fleet raided Kyushu and set their sights to invade the islands. The Samurai fought hard to repel the Mongols and had what they believed was divine intervention. A ferocious storm, called a kamikaze devastated the ships and ended Genghis Khan’s hopes for a Japanese invasion.


To the Samurai, as with medieval knights, honor was a matter of seriousness. When all was stripped away, earthly goods, weapons, and even his clothes, a man still had his honor. A Samurai without honor was disgraced. A man disgraced could wipe away his sins by the act of Seppuku, or as Westerners know it, Hari Kari. The act of ritualistic suicide was extremely painful. The man committing Seppuku cleared his slate and in many cases, earned bonus points for his (and his family/lord).

Seppuku involved the slicing open of one’s abdomen with a dagger. Many times a loyal friend would decapitate the unfortunate fellow in a moment of extreme pain. This was allowed. The famous Samurai, Minamoto Tametomo was the first recorded case of Seppuku. Minamoto Yorimasa performed the act after being defeated in battle of Uji in 1180. It should be noted that before Yorimasa killed himself, he took a few minutes to write out a poem, thus setting a precedent for future Samurai to emulate. Another Samurai, Akechi Mitsutoshi had to one-up Yorimasa by writing his poem with a brush on a door in his own blood.


There is one further type of extreme loyalty to a leader found in Japanese history. The term is junshi and it loosely refers to following a lord to death by ritual suicide. In 1333, at the beach of Kamakura, the Hojo family knew they had been defeated. Word spread to Kamakura. By the time the fanatics had finished, over six thousand bodies lay dead by their own hands.


What made the Samurai feared? Just like knights, samurai trained from childhood. Learning consisted of wrestling, swordplay, archery, and riding. They were mounted archers first and even today proud Japanese practice the art of yabusame, where participants try to hit wooden targets at a gallop. One samurai, Imagawa Yorikuni, was known to have twenty arrows before dying. Samurai also used spears, swords, and eventually guns.

Beyond the fighting arts, as the Samurai warrior evolved students learned cultural arts, history, writing, art, and music. Students had regular school hours and even had ‘vacations’.


Samurai: the World of the Warrior

Alas of the Medieval World

Stay safe out there!
Posted by Greycliffs Chronicles at Saturday, July 13, 2013