The Man Who Rewrote History:Geoffrey of Monmouth

De Historia Regun Britanniae, or The History of the Kings of Britain, by Geoffrey of Monmouth was the bestselling book of its time. Read out loud to those who either couldn’t read (or couldn’t afford a copy), the tome was more than a book - it influenced generations - although Geoffrey did use the pen name of ‘Galfridu Monemutensis’. It was first published in 1138, and was the closest thing to an overnight sensation. But, was the manuscript historic fact or a romantic fantasy?

Geoffrey of Monmouth was born in the eleventh century, in Monmouth, southeast part of Wales. His father was named Arthur. Historians are torn on whether he was of either Breton, or mixed Breton and Welsh heritage. He was at St. George’s canon, at Oseney Island, near Oxford, from 1129 until 1149. He was made bishop of Llandaff in 1140. In 1151, Geoffrey was appointed bishop of St. Asaphs, and ordained & consecrated in February of 1152 by Archbishop Theobald at Lambeth Palace. Geoffrey was one of the many witnesses to the peace treaty between King Stephen and Henry FitzEmpress (the future King Henry II), at Winchester.

The Bishop Geoffrey was dedicated to history. One of his early works was Prophetic Merlini written sometime before 1135.  The book was based upon prophesies supposedly told by Merlin to King Vortigern in the fifth century. Geoffrey claimed he’d discovered the information from an earlier British work. The reality was, he’d most likely made it up and any proof offered was questionable.

The book wasn’t just about Arthur. Geoffrey listed every King back as far as he could, using written and oral histories. Relying on oral traditions was an acceptable means of verification back then as parchment & paper was expensive and most people couldn’t read or write. Heralds, or bards, would pass on stories as means of keeping deeds and history alive.

Geoffrey was fascinated with Arthurian studies, even signing an official Oxford charter once as ‘Galfridus Arturus’. Oxford drew scholars from all over the world. Geoffrey took advantage of the social and education diversity around him, picking their brains for information. He was determined write the history of the British kings, showing a bloodline dating back to Arthur. The Bishop started his research early in the life.

When later questioned about the Historia, he claimed part of his sources included written references obtained from Walter the Archdeacon, Provost of St. Georges. Too bad, he would say, those papers were conveniently ‘lost’ and not available. That seemed to be a trend with Geoffrey, but his enthusiasm and his Norman readers’ wish for legitimacy in the royal bloodline, overlooked the pedigree flaws. Geoffrey used enough facts, many taken from De Excidio et Conquestu Britanniae by Gilda (On the Ruination of Britain) written in 540 A.D. Bede’s Historia Ecclesiastica Gentis Anglorum (A History of the Christian Church in England) was completed in 731 AD, and Chronicles by Nennius to make his book sound legitimate. Intertwined with the real history, Geoffrey mixed in his fantasy lineages and twisted takes. If nothing else, it made for exciting reading.

Gildas was born in the Clyde area of the Picts kingdom in the sixth century. He was a priest, with a Roman education, who recorded the Saxon invasion of Britain. Bede, or Saint Bede, was a monkborn in the min seventh century. He spent much of his life at the St. Peter's monestary in Northumbria, where he was a well-respected scholar. Nennius was an eighth century man who collected works, edited them writing and published the papers in a single manuscript. His book focused on Britain after the collapse of the Roman Empire. Part of the material covered includes information of Arthurian battles.

The result was a publishing blockbuster. There are over 200 copies in existence today: considering when the manuscript was written and that copies were hand done, that is amazing. His novel was dedicated to three men: Robert, Earl of Gloucester; Robert Waleran, Count of Meulan; and, King Stephen. All three men were considered the most powerful and powerful men in the kingdom. Talk about kissing up to the top dogs!

Geoffrey’s books were circulated among courtiers. Soon, his book was being quoted in other works. Geoffrey Gaimar quoted Monmouth when he published a book of poetry, L’Estoire de Engles. Despite the accolades, not everyone touted the Historia as a great work of nonfiction. A Welshman, Gerald, and acknowledged historian William of Newburgh (English) publicly called the book a bunch of lies. One thing is not in doubt; Geoffrey’s Historia influenced other writers. Chrétien de Troyes took the Arthurian romance to a new level, publishing his stories. Wace used Monmouth’s book as a reference when writing his own book, Roman de Brut (Tales of Britain) in 1155 after first producing a history of the Normans for King Henry II (Romans de Rou). Sic copies of Wace’s Brut are known to exist. 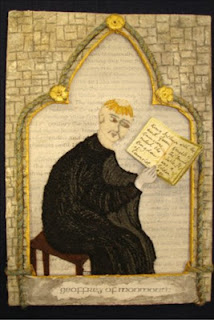 Just how influential was Monmouth’s work? When the Barons wrote the Magna Carta, one line appears to be taken from Geoffrey’s Historia, line 12, referring to leaving of scutage or aid, “...unless by the common counsel of our kingdom.” In a letter written to the pope in 1301, King Edward III quoted the Historia as a claim to Scotland.

Could Monmouth have found real documents? Modern researchers have tied some of the Arthurian legends to a Roman general, Ambrosius. We also know there was a great battle in England at Baden Hill, led by a Celtic Chief. In the early sixth century, Arthur became a popular name. This was about the time of Arthur’s death.

Another way to look at the Historia is that the book is a continuance of Virgil’s Aeneid. According to Graeme Fife, in his book Arthur the King, Geoffrey of Monmouth’s book is a sequel. First remember, Trojan Prince Aeneas escaped from Troy and founded a new kingdom in Italy, called Alba Longa - the eventual site of Rome. In other words, Geoffrey was trying to wrote turn his romantic fiction to a historical fact.  Consider how Henry I took the throne after his King William II (more commonly known as William Rufus) died from a stray arrow shot by William Tirrel. This story is mirrored in Geoffrey’s book. Graeme quotes Geoffrey:

“...his great-grandson, Brutus, has the misfortune (or temerity?) to shoot his father dead with a stray arrow on a royal hunting expedition. Hounded out of Italy he flees to Greece, on to Gaul, where he conquers the non-Celtic territory known as Aquitaine, and then crosses the Channel to his eventual home, the island known in those days as Albion.”

Geoffrey knew linking the Norman dynasty to the Trojan royalty would prove legitimacy to William the Conqueror, and thus securing the throne. What better way than to ‘prove’ a direct blood lineage for William I and his descendants to King Arthur himself? With a creative hand, Geoffrey managed to show the roots of the new English Kings back to Brutus - who gave his name to Britain. To add icing to the cake, Brutus’ two sons, Locrinus and Kamber also made contributions to the islands. England’s name came from Locrinus and Cambria (Cumbria) from Kamber. The wily Geoffrey had a family tree charted until 689 AD. The Normans loved the book, and why not? Who wouldn’t want to be lauded as having the regal ancestor King Author? The possibility was that the Normans needed a regal ancestor as great as Charlemagne to have on the pedestal to dangle before the French King (to whom the English King was technically a vassal to). Who better than King Arthur? 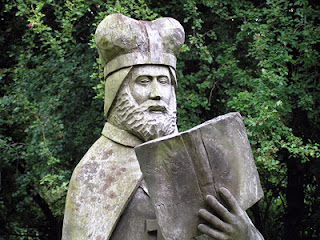 Before he died, Geoffrey wrote a third book, Vita Merlini (Life of Merlin). A poetic bock in verse about Merlin’s life after the time ended in the Historia. Various accounts have Geoffrey dying between 1154 and 1156 in Llandaff.

Stay safe out there!
Posted by Greycliffs Chronicles at Thursday, February 21, 2013