Want to get a taste of ye olde days? Find a Renaissance Fair and spend a day having fun watching the entertainment and maybe learning a bit of history at the same time. You can now find Renaissance, Pirate, or Medieval fairs through-out most parts of the county, and in fact, in many other countries as well.

From the moment a guest pulls into the parking lot, it is easy to be immersed in the culture of the players and vendors, but what exactly is the Renaissance? Ask any teacher or historian and you will get different answers. Look at multiple sources and the results are the same. Basically, the time period starts roughly at the 14th century and goes through to the 17th century. 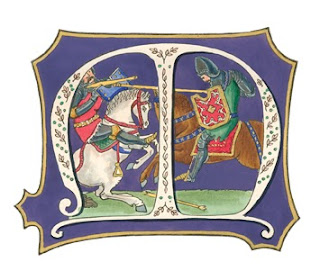 By the 14th century, metal armor had advanced from maile to full plate (aka knights in shining armor). Tournaments were ritualistic affairs, with the knights wearing fancier helms and covering their destriers barded cloth. Tournaments were occasions for villagers and nobles both to put aside the daily routines and spend a day (or a couple) cheering on their favorites, selling or buying goods at the impromptu marketplaces which sprung up, and even taking advantage to arrange betrothals with men or women from other villages. One must keep in mind that the average person rarely travelled further than they could walk in a couple of days.


Granted, the reconstructed Renaissance Fair isn't exactly like the actual medieval village. First of all, we have access to modern conveniences (plumbing, medicine, refrigeration of put food). Our laws not only keep the peace but we no longer have a feudal class structure. Yes, there are the rich (haves) and poor (have-nots) in our society, but that has been true during any time of history.

Experiencing a fair for the first time is a treat. It begins when you walk up to the gate and purchase your ticket. Employees and vendors are dressed in costume and interact with guests. The language used a mix modern American English and Shakespearean English. Expect to see many attendees also dressed in various costumes: Renaissance, medieval, barbarian, Viking, Roman, pirates, Scottish, fantasy (fairy, dragons), and styles from medieval movies (Monty Python's Holy Grail, Kingdom of Heaven, Lord of the Rings, King Arthur, etc.). Some fairs rent costumes for those who feel brave enough to try a costume without the expense of buying one. 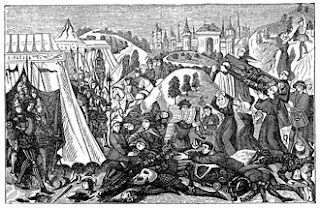 Fairs offer something for every member of the family. For the young children, most fairs have a children's area with medieval-related games. Kids can try slaying a dragon or being a knight for a day. Other may have Renaissance-themed rides.

There is plenty to watch at Renaissance fairs. The music tends to lean to Celtic, New Age, or folk
style. You may recognize many of the bands, such as T he Wicked Tinkers. Puppeteers, comedy shows, raptor and/or hunting dog demonstrations, and belly dancers are found at most fairs. By far, the most popular event is the jousting show, where men (and women) put on a carefully coordinated show of full-contact jousting. 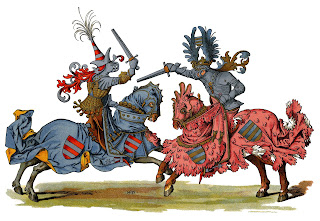 If you want you have a really good time, go in costume. The actors/fair personnel will interact with you on a different level. You will notice an increased attention from the wandering entertainers and the show people. The fair seems to be more fun when you go dressed up.

Below I've listed some links to sites with more information on Renaissance Fairs. The first one, the SCA, is the home page for people who wish to get involved in the fairs, perhaps even join a guild as a member. The others are magazines with information and articles. Many have listings of events, vendors, articles, and general information.

stay safe out there!
Posted by Greycliffs Chronicles at Thursday, July 11, 2013