Retired but not dead: Sir Robert of Faucione

Continuing with the previous review of Thaelia's World characters, this study is of an older house knight in residence at Faucione Castle.
Sir Robert of Faucione is a retired house knight at Faucione. Prior to becoming pensioned, he served as Baron Faucione, Sir Phillip’s Master of Arms. Robert and Phillip are friends, hence the reason for the older knight staying at the keep after he reached his 51rst year. Robert may be in his fifth decade but his mind is still sharp.
Sir Braeden values the advice of this elder knight, as does Sir Ranulf when he is left to look after the keep when Braeden is away. Robert is no fool. He understands that his reflexes are not what they used to be. This doesn’t keep him from the lists or the council chamber when troubles arrive at the gates. Sir Robert’s knowledge is well used after Phillip dies and  Sir Braeden becomes the new Baron.


As many men in his position, Robert never settled down with a wife. It’s tough to raise a family without a place of your own. Instead, Robert became a surrogate uncle to the keep’s children. He and his parents are members of the Faucione family, far enough down on the family tree to not have land but still be noble enough for the men to claim knighthood. 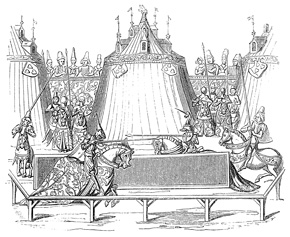 As a younger man, he was known for his skills in the joust. Robert once had 75 continuous tournament wins, earning high praise from King Hadrell and a new set or weapons & armor in honor of Prince Arken’s birth.
While Braeden is off handling business at his other holdings, or attending King Arken, Robert often advises Gaelynn, Aumery, or Ranulf in daily matters. He is the epitome of a company man: loyal to the core.
Here is Sir Robert’s profile:
Born:  March 4, 1132
Height: medium
Weight: average
Hair: black
Eyes: blue
Mother:  Marianne of Hedgewood
Father: Sir Jeffrey of Hedgewood
Family: Faucione cousins
Astrological sign: Pisces
Stay safe out there!
Posted by Greycliffs Chronicles at Saturday, July 06, 2013