Once a friend, always a friend: Sir John of Faucione

Sir John of Faucione is the son of a house knight and a lady’s maid. His parents married as soon as his mother found herself with child. John was fortunate in that he was born and brought up with the intention of becoming a knight, just as his sire, Berwin. 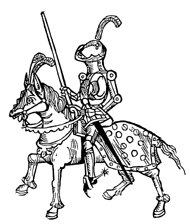 Once John completed his training and received his spurs, he was sent to Faucione where he took an oath of service to Baron Faucione, Sir Phillip.  Working his way from the bottom of the chain, John showed his worth to Phillip by his keen sense of organizational skills. The Baron saw how easily John completed tasks and efficiently organized workers.


John soon found himself part of Phillip’s inner circle, privy to the secrets of Faucione Keep and the family’s other holdings. He travelled with his lord, learning the ins & outs of management, meeting the extended family, and finally named Seneschal to Faucione. John held the position until Braeden, Phillip’s son took the reins of power from his ailing father and placed his own man, Sir Aumery in the post. John didn’t mind, he was ready for a life of leisure but stood ready to assist Aumery and advise Braeden at a moment’s notice.


John and Sir Robert share a private chamber, two of a handful of people privileged to do so. Most of the castle residents share group spaces, barracks, or find open spaces in the great hall at night.