A second voice was at mine ear,
A little whisper silver-clear,
A murmur, “Be of better cheer”.
As from some blissful
Neighborhood,
A notice faintly understood,
“I see the end, and know the good”.
A little hint to solace woe,
A hint, a whisper breathing low,
“I may not speak of what I know”.
Like an Aeolian harp that wakes
No certain air, but overtakes
Far thought with music that it makes:
Such see’d the whisper at my side:
“What is it thou knowest, sweet voice?” I cried.
“A hidden hope,” the voice replied:
So heavenly-toned, that in that hour
From out my sullen heart a power
Broke, like the rainbow from the shower,
To feel, altho’ no tongue can prove
That every cloud, that spreads above
And veileth love, itself is love.


Monday, December 3rd was one of the toughest days of the year. In fact, so far, it ranks in the top ten in the worst days of my life. Our beloved 13 year old medium haired black cat, Jezzie, took his last breath.

Jezzie didn't recognize my husband, Sam, or me, today. He'd had a stroke overnight (on top of his other condition explained below). It broke our hearts to make the decision to let him go, but it was the right one. His eyes told us. Still, it didn't it the choice any easier. 13 years is a long time to have a feline companion. We certainly expected him to around a few more years.

Maybe some folks would tell me, "So what, big deal. It's just a cat. You can go to the shelter and get another one." I could, true, but not another Jezzie. My husband contacted our son and let him know right away. Sebastian was obviously upset. He said some words that made sense to me. My son told me Jezzie fit in with our family. He was more than a cat, he was different. At times, Jezzie acted more like a dog than a cat. 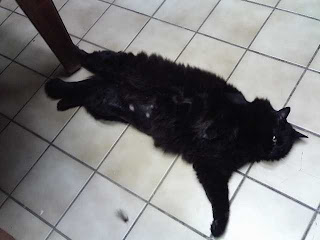 After our son grew up and moved to his own place, he always looked forward to visits. Jezzie never failed to greet our son. The last time, back in July, when Sebastian came up our way, Jezzie followed him around and even stayed in the room with him at night. I was glad they had that time together.

Jezzie was diagnosed with feline hyperthyroidism just last week. He took a sudden turn for the worse yesterday when he suffered a major stroke.  He dropped almost four pounds in a week. His eyes told us he was ready to cross the rainbow bridge.

Jezzie, also known as “Mr. Kitty” or “furbag” came to our home when he was eight weeks old in August of 1999, a black ball of fur with a big attitude. At the time, we still had our first Chinese Shar-Pei, Pu. Pu had just turned eight years old. Pu tolerated this little upstart with sharp claws when it was made clear to him that the kitten was a new member of the pack.

Jezzie, then ‘Jezebel’ was born at Six Flags Marine World to feral parents. The Park kept cats to keep down the rodent population. His sire was a large black cat with his ears half gone from fighting. I don’t know what his mother looked like. We, and his veterinarian believed him to be a she – until the day of the spay operation. Yikes! Needless to say, we found a new vet and Jezebel became Jezzie. (the vet said he thought we knew what we were doing, so he ‘took our word on the kitten’s sex’ instead of checking for himself). I should have named my own fees for the office visits, too.

Jezzie was a very tough boy as he grew up. He hit is adult weight of 22 pounds of pure muscle. The vet said he was part Maine Coon and we believed those words. He and Pu would chase one another around the house; Jezzie jumping on Pu’s back to ride him like Pu was a horse. Jezzie took Pu’s death hard, walking around the house crying for days afterwards. From that day forward, Jezzie would never lay on Pu’s old dog bed or the futon where the two of them had used to curl up together. I wrote a story about Jezzie & Pu which appeared in the Chinese Shar-Pei Club of America’s magazine, ‘The Barker’ in year 2000. When Moshuh arrived as a puppy, Jezzie took it all in stride and immediately became ‘alpha dog’. The two played chase and wrestled. Even after Moshuh had grown up, Jezzie would hook Mo and flip the dog over. 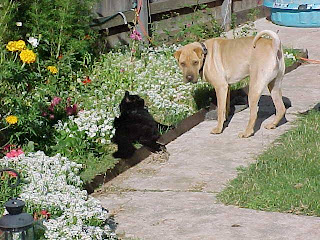 Jezzie was a tough cat, being the neighborhood bully. Other cats would run for cover when our black menace patrolled the neighborhood. One neighbor was involved in stock car racing. He worked on his vehicles on his spare time, owning a forklift to move engine and other heavy vehicle parts in & out of the cars. Jezzie took an instant dislike to the forklift, hissing and attacking it whenever the neighbor brought it out of his garage. One of our neighbors had pit bulls. Jezzie went in the yard to challenge the dogs on a regular basis. He was a champion jumper, leaping eight feet up from a sit. His vocals varied from the usual purr to chirping and a wide range of meows.

He had his soft side, too. He had a way of gently touching one of us with his paw when he wanted attention. He try a couple of times. If that didn’t work, he’d head butt us. If that didn’t get the expected results, the claws might come out, or we might find ourselves with a lot of cat in our lap. In the morning, when he decided it was time to eat, he would wake up the dog, who would then bark. Moshuh was Jezzie’s alarm clock. Another method for getting his morning feed was to jump on the bed and chew on the hair of the closest person sleeping. A paw-slap to the face was another tactic he used.

Jezzie loved to go on walks, often following Sebastian when he went to his friends. That silly cat would be as much as eight blocks away from home! How he managed to avoid being hit by vehicles I’ll never know. He followed us when we did the quickie mart trips for a gallon of milk, going as far to squeeze through the door and wander around the store with whoever was tasked with shopping. Funny, the clerk(s) never complained. I guess that cat surprised them at first and after so many visits, they just learned to ignore him.  He wore a collar and was micro chipped, just in case he was picked up by animal control (never happened). Jezzie was a hunter extraordinaire. He captured the normal small birds and mice, but it was the other animals that impressed us: squirrels, seagulls, and once a possum. He never lost a fight and never walked away injured.

In California, at our home in Vallejo, his favorite spot to relax was by our pond. He’d hunker down in the foliage and watch the Shubunkin (a type of fancy goldfish) swim close to the surface. He never caught one, but he kept watch just the same. On warm days, Jezzie would roll on the lawn for a bit and then find a shaded place to curl up for a nap. I grew catnip in the flower bed just for him. During bad weather, he and Pu (and later Moshuh) would lie down in front of a near floor to ceiling window and watch the world go by. 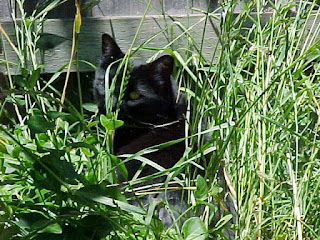 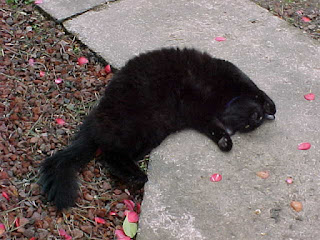 When we moved to Las Vegas, he hated the house. The backyard was a combination of rocks and concrete. He’d go out front when the weather permitted, but he never really liked the place. We placed a comfy lounge chair by the living room window that Mo & Jezzie made their own. Of course, both of them ripped it up with their claws: Mo by accident and Jezzie on purpose. He also destroyed on ottoman. Jezzie was like that. If he was unhappy, he let us pretty darn quick. Items would be pushed off tables and counters, papers  ripped up, and cabinet doors opened and slammed back closed repeatedly one a flicked of his paw while he watched us. He loved sleeping in the linen closet or on top of freshly washed laundry. A willing lap was another favored place. 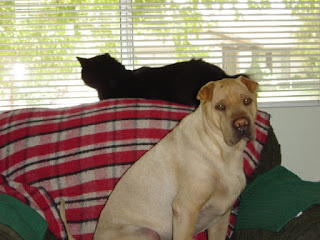 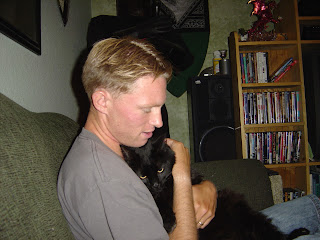 Jezzie loved to be brushed and have his ears rubbed. Can’t find the cat? Shake the treat jar and he’d magically appear from a spot you’d swear you just checked seconds before. Once we moved to his final home, he became a new cat. He loved his backyard. He started catching mice again and spending time outside watching birds. There was one incident where a neighborhood pit bull came wandering in our yard. It decided Jezzie was fair game. Normally a 13 year old cat would be at a disadvantage, but not our bruiser. He stood on his hind legs and swatted at that dog’s face, drawing blood. Next, Jezzie leaped on the dog’s back while the dog turned in circles. After having enough, Jezzie, with his fur fluffed up, jumped on the tree in our yard and began to climb. That’s when Moshuh took over, giving the intruder somewhat-for of his own. The pit took the hint, running away yelping at the top of its lungs, all bloodied up. Neither Moshuh nor Jezzie had a single scratch.

I know Pu was waiting for his friend in the Summerlands. They are enjoying life at their youthful peak, in the best health. One day, we’ll be with them again. A family reunited.