Moshuh’s Adventures has returned after a long hiatus. Moshuh and I took advantage of a balmy, clear January day to check out Evans Canyon Trailhead in Reno. This large natural area is easily accessed off Virginia from McCarran, just opposite from San Rafael Regional Park. The park has a baseball field and scattered benches, along with plenty of paved parking.

Dogs are welcome on the trails provided they are leashed. When Moshuh and I arrived, there were half a dozen other folks enjoying the scenic grounds. A couple of young men were tossing a Frisbee to one another. There were multiple hikers out with dogs spread out among the trails. The sigh posted at the beginning of the trail requests that all users clean up after their animals. 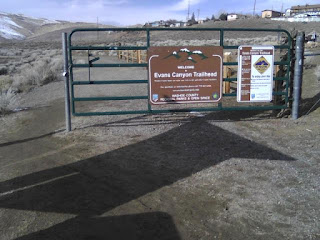 I guess the other people were visitors from other countries who didn’t speak or read English. None of the other folks with dogs had their animals leashed. From the amount of droppings Mo and I encountered, the issue of cleaning up after canine companions is a problem here. I can’t emphasize this enough: bring bags to remove your dog’s feces. You can’t tell a wild animal where to drop its scat but a domestic dog  is a different matter.

Enough of the soapbox. Moshuh was eager to wander and even stopped once in a while to take in the sights. 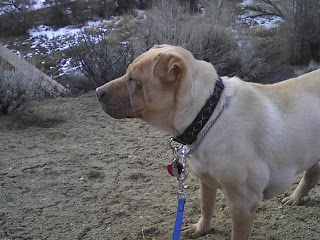 We spent a good amount of time wandering the trail, trying to avoid the worst of the mud. I expected this, as much of the recent snow had started melting due to a ‘heat wave’ (gotta those those upper 40’s). Moshuh had no problem with the squishy footing, happily plowing right through it. The land varies from level to hilly, so be prepared with good shoes. There was still patches of snow through-out the park. We didn’t see any wildlife, but with at least four unleashed dogs running around that was no surprise.
Not too far from the start of the trail is a nice monument, but honestly, we didn’t get close enough to see what it was for. Mo was too busy sniffing and following a scent that led in an opposite direction. Since he was having such a good time, I didn’t worry about the display this time. 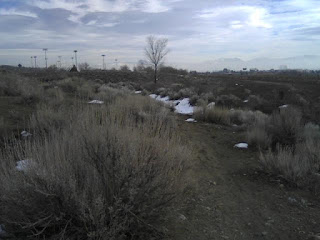 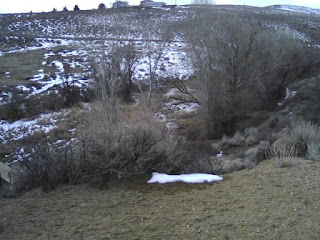 In warmer weather, this is a park where caution would definitely in in order. Before going off the beaten path, watch out for snakes. It was cold enough, that I wasn’t as concerned about this type of danger. With the soggy ground, a slip was a bigger worry in my mind. Regardless of potential troubles, I never go out on a hike without a fully charged cell phone.

After we were done, we had to take a little cleansing time to remove mud. The change in Moshuh was worth it. His cabin fever was gone, and his tail was wagging a mile a minute. Once we hit the home front, he curled up and took a long nap with his favorite toy. Oh, the perils of age, the mind is willing but the body just can't keep up like it used to, huh boy? 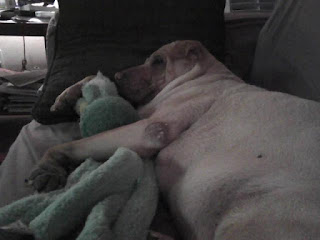 Stay safe out there!
Posted by Greycliffs Chronicles at Saturday, January 26, 2013