Danger from the sky: Falconry

The image of a nobleman mounted on a fine horse, with a hawk on his arm, his hound running alongside is a classic picture of a leisure activity in the Middle Ages across the globe. Men and women enjoyed hunting and falconry was an important part of the hunt.  Fortunes could made by selling, or gifting, the right bird. 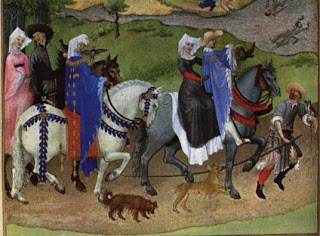 It was uncommon for men or women to keep a hawk on their wrist as they went on a visit. Favorite birds were kept in site  of their owners.


Common species of raptors included the Peregrine, which was good for catching partridge, stork, crane, heron, bustards, or geese.  Peregrine had two methods of obtaining their prey: either latching on it the other bird with their razor-sharp talons and bring it to the ground (called binding) or falling on the bird from high above (called stoop) and killing it with their talons. The Gyrfalcon was more independent but once trained was quicker to stoop or bind its prey. Gyrfalcons were found in the Scandinavian countries. The Saker called the Middle East and parts of Eastern Europe its home; it was sometimes mistaken for a Gyrfalcon due to its white markings. Lanners were found throughout Europe and were useful in hunting small game, herons and partridge. An Alphanet is an African bird used to hunt small game. Merlins hunted small birds and even partridges. The Hobby was used to hunt small birds. The Goshawk was used to hunt small games and birds. Goshawks were launched from the owner’s wrists and were known to be bad-tempered. The final bird commonly utilized for hunts was the Sparrowhawk, which could bring down partridges, woodcock, or pheasant. Eagles, Owls, and Ospreys were trained to catch small game, foxes, wolves, and fish.
The picture below is a Peregrine Falcon. 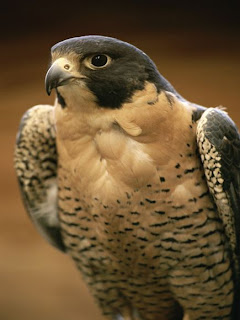 the image below is a Gyrfalcon 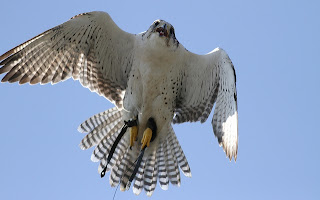 the picture below is a Merlin 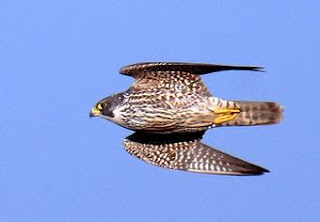 the picture below is a Red-Tailed Hawk 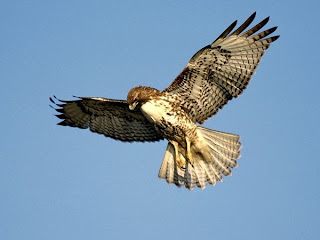 Unlike today, where many raptors are bred by owners and can be sold or traded amongst falconers, in the Middle Ages the fanciers obtained birds from the parents’ nests.  Forests were often protected hunting sanctuaries for the Monarch, for those areas not royal preserves, local cities might impose a ban of their own during nesting season. In John Cummins, The Art of Medieval Hunting: the Hound and the Hawk, he writes:


“In Seville it was forbidden to shoot a bird of a species used in falconry with a bow or crossbow within a league of the city. When Robert of Avenel gave Eskdale to the Church of St. Mary of Melrose, he reserved the game rights and accipitrum et sperveriorum nidos, the nests of hawks. In a dispute in 1235 about the monk’s rights, the document was interpreted as prohibited them from frightening hawks away or felling trees in which they were known to previously nested.”


Young raptors stolen from their parents had to be tame; a challenge for the falconer. Older birds could be caught in nets as they followed flocks of migrating birds. Taming a raptor was no guarantee it would remain with the owner. Once released to a hunt, one had to hope the bird would return – many didn’t, thus the demand for birds was steady. One of Norway’s best trades was Gyrfalcons, traded for grains. The picture below is of an Osprey. 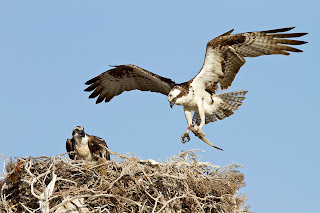 Falconry required some standard equipment, most of which is still in use today. The jesses area a pair of leather straps. One end of the jesses are secured to the legs of the hawk and the other to a metal ring called a tyret. A leash passed through jesses and held the bird to a perch. Bells were tied to the raptors legs by leather straps called bewits. A hood went over the bird head to keep it calm. Hoods were often decorated. A lure was a piece of heavy duty leather on a long rope or cord. The lure would be used to recall the bird or for training (with a piece of meat on it). The perch was the place where the bird rested when it wasn’t being flown.  Perches were kept in the mews, a building just for hunting birds and the keeper.
During the hunt, beaters might be sent ahead with dogs to flush out game. Once the prey was sighted, the birds were released. The bird would fly and depending on the individual style of the bird, would fly and take the game in question. Raptors would then stand on their kill, holding their wings over their prey to 'hide it'. The bird would begin eating, as fast as it could. When the bird's owner arrived, he or she would offer a treat to the hunter to lure the raptor off the kill.  If the bird performed according to his/her training, it would hop on the person's arm, taking the piece of meat. 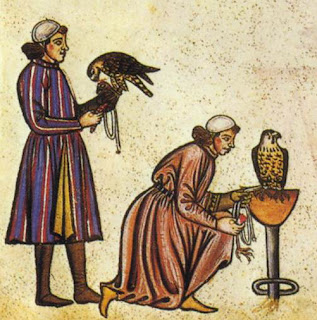 Unlike the past, obtaining a bird now is a little more difficult.  One can't simply  take a baby hawk from a nest or throw a net over an adult in the wild. The North American Falconry Association (NAFA) has a list of recommendations to follow, including a link to the U.S. Department of the Interior, to get your started. I have included the link to NAFA. They have links to each state's wildlife department, as you must check to see if a falconry license is needed as well.


The Medieval Art of Hunting: The Hound and the Hawk


Stay safe out there!
Posted by Greycliffs Chronicles at Thursday, August 29, 2013