"Here stood the oak tree, on which an arrow shot by Sir Walter Tyrell at a stag, glanced and struck King William the Second, surnamed Rufus, on the breast, of which he instantly died, on the second day of August, anno 1100. King William the Second, surnamed Rufus, being slain, as before related, was laid in a cart, belonging to one Purkis, and drawn from hence, to Winchester, and buried in the Cathedral Church, of that city."

The inscription on the Rufus Stone which supposedly marks the spot where William Rufus was felled by the arrow. 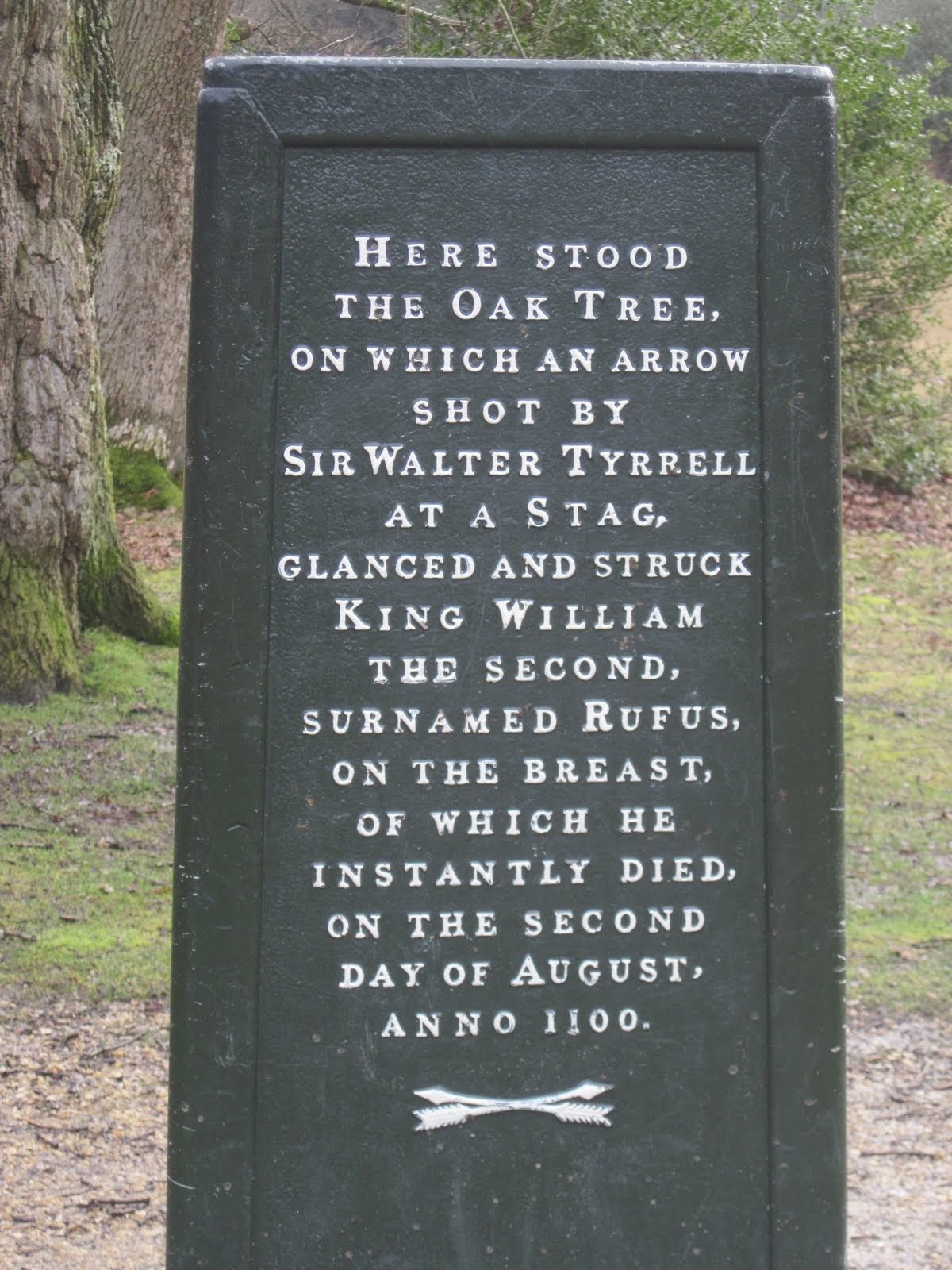 If one thing is certain, it is being born with Royal blood doesn’t make one safe from harm. Case in point: William, second son of William Guillaume le Batard – more commonly known as William the Bastard or King William the Conqueror (of England). The young son of the Conqueror had reddish hair and a ruddy complexion which landed him the nickname of William Rufus. The King had decided to bequeath Normandy to William’s older brother, Robert Curthose and England to William. A fourth son, Henry wasn’t due to get any land at all. Poor Henry would end up with a pouch of silver, about $5,000. Pounds, once his father kicked the bucket.

The division of the lands wasn’t acceptable by the family. Robert and his father were known to argue over it. In fact, Robert fought his father at the Vexin, in combat. Robert felt he should be heir for all of the lands, not just part of them. It was written by some historians that Robert and William never truly reconciled after the fight and that Robert’s lack of presence at his father’ deathbed was a result of the rift.

Alas, Daddy-dearest didn’t really know his middle son. William Rufus was ambitious: he too, wanted it all. He bode his time and gathered men loyal to him. Sheriffs, the English militia, and many of the churchmen had William’s back. When William I died, Rufus took Superman-like action and rushed to England from Normandy. He organized his crowning in Westminster Abbey on the 26th of September, 1087 by the Archbishop of Canterbury Lanfranc before Robert could even make it to London and England had a new king: William II.

This act didn’t sit well with all of the folks: Odo of Bayeux. Odo’s mother was Herleva, making him a half-brother of William the Conqueror, and his father Herluin de Conteville. Herleva had married Herluin after her affair with Robert, the Duke of Normandy. Odo accompanied his brother to Hastings, where William won the decisive battle. Bishop Odo, the Earl of Kent wasn’t happy with William Rufus’s jump in the chain of command. He gathered an army and tried to get a rebellion going but it fizzled out after capturing a few towns along the way.

William did manage to do some good. He spent time in Normandy regaining lands to increase their holdings. While the King fought to make the realm greater, sore loser Robert joined the First Crusade, selling his Duchy to his brother to pay for his expenses at a cost of $10,000 marks. William also purchased the Abbey at Caen which included William I’s coronation regalia (crown, scepter, and the rod). Robert never saw his brother alive, as the King was dead before he made it back to England. He renewed the treaty with King Malcolm of Scotland and Rhys ap Tewdwr, from Deheubarth (Wales).

Eager to increase territory, Rufus allowed his English people to spread beyond areas that they had previously left alone. When settlers put down roots in Shrewsbury (near Central Wales), Montgomery (in the south), and Carlisle & Durham (in the north), the rulers of Wales & Scotland protested and raiders crossed borders. During a series of raids, King Malcolm and his son were killed. William places Edgar supported Edgar as the replacement King, who swore homage to the English King as an overlord. William II took advantage of the resulting chaos on all neighboring lands in England, setting up fortresses and declaring border lands (the Marshes) under his control. He tried to get the Vexin back, but was turned back. He then set his sights on Maine. Rufus captured Le Mans after seizing the city’s leader, Helias de la Fleche. The City negotiated a treaty, let the King within the gates and he then returned to England in triumph.

William had an uneasy relationship with his Bishops, especially the successor to Lanfranc, Anselm. The two argued over policies and the Archbishop of Canterbury eventually fled England in 1097 to the papal court.

William Rufus died during a hunt on the 2nd of August, 1099, in New Forest. The circumstances were very suspicious. William was hit in the chest by an arrow shot by Walter Tirol. The King was also with Lord Poix, and also rumored to be with his brother, Henry. Tirol admitted to accidentally shooting William, but history shows that Henry wasted no time riding to London, where he was immediately crowned King on 5th of August. Could Henry have set up his brother to be assassinated? Could another nobleman have done so on behalf of Henry? It could have been a missed shot at a deer as Walter claimed. In fact, William’s brother, Richard was killed by the same method in 1075. 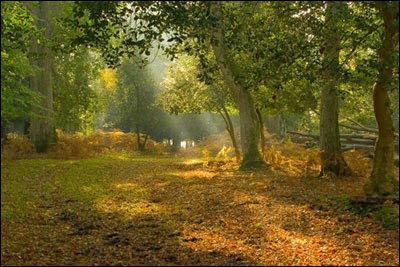 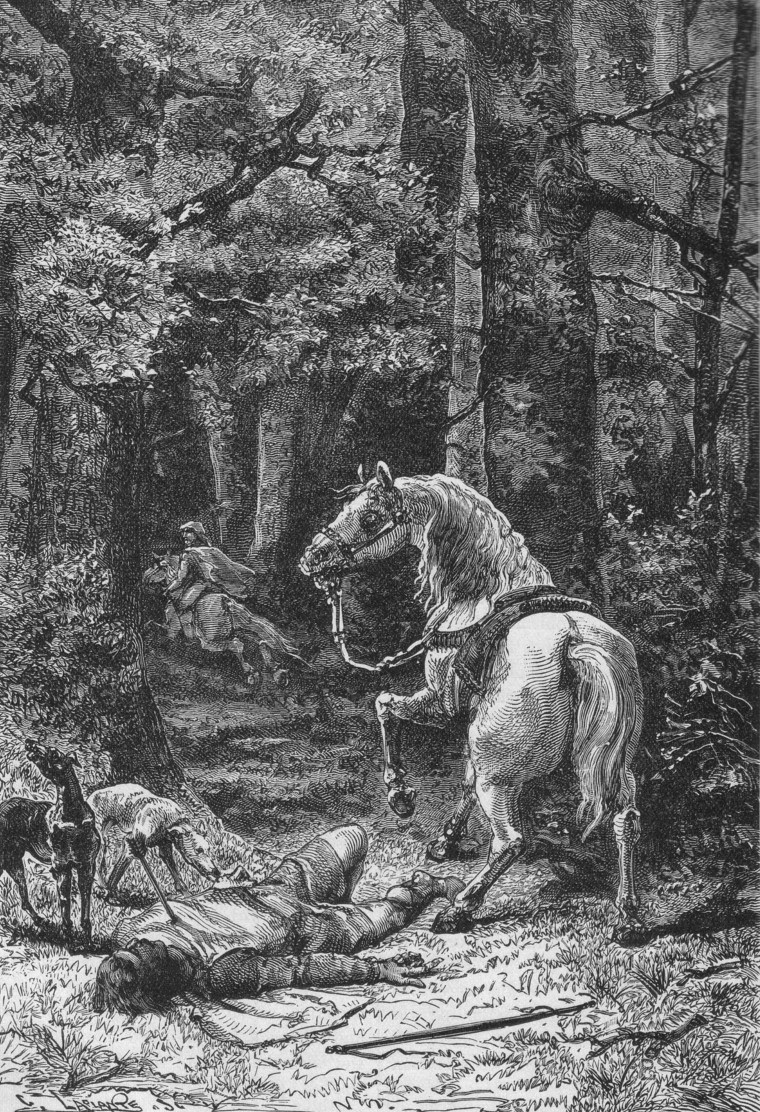 Rufus wasn’t married or even betrothed. He had no bastards. He was known to be gruff, but didn’t hold grudges. A contemporary writer, Oderic claims that William Rufus had considered marrying Edith, the daughter of King Malcolm. Other historians claim he was a homosexual. We can’t judge people of the past by our standards. The medieval English court of William Rufus’ time was known for men wearing their hair long while the French-Norman style was to cut the hair short. William was known for wearing bright, almost gaudy, colors and the latest fashions. Alas, chroniclers mention ‘effeminate young men’ crowding the court. After the King’s death was he accused of being a homosexual and the Council at Rouen in 1096 spoke out publically against men wearing their hair long. The churchmen hadn’t the courage to take on William while he was still alive.

Was he a good or bad king? In 1099 he was at Brockenhurst in New Forest for a bit of rest & recreation. A messenger came to the King with a report of a siege at Le Mans, on the mainland. Rallying his men, Rufus set off for the coast and sailed across the Channel during a storm. The following day, he was in Normandy getting an army together. When it came to taking care of business, William Rufus didn’t mess around.