Templars, Hospitallers, & Teutonic Knights on my! Military orders of knights

Who can forget the dramatic scene in “The Kingdom of Heaven” when King Guy of Lusignan rallying the Templar Knights to attack Salah ed-Din Yusef (Saladin)? In Ridley Scott’s film, the King was aided by the Templar Knights.  It made for a nice Hollywood moment.

One can’t speak of the Crusades without discussing the military societies prominent during the times. There were many groups of men banded together for the Holy cause but the three we are most familiar with are the Knight of the Order of the Temple, the Knights Hospitallers of St. John of Jerusalem, and the Teutonic Order. Each organization had its own agenda.


The Teutonic Order of Knights was based out of Germany.  The Teutonic Knights showed up in Outremer full of enthusiasm led by Grand Master Henry de Walpot. The men had dreams of leading the Crusade but ended up confusing the mix. Germans had taken up the pilgrimage along with men from all over Europe. As with the Hospitallers, the Teutonic Knights focused on providing medical aid to those on need but were more than happy to wield a sword against the Arabic forces. After Saladin regained control of the Holy City, he allowed the Teutonic Knights to stay providing they continue the healing duties of their Order. One of their more well-known benefactors was Frederick of Swabia. He gave money that the Knights would keep on taking care of the sick & wounded. Henry VI gave the men a home in Palermo, Sicily. The Knights did get caught up in Pope Clement V’s inquisition but were saved when Gerard, the Count of Holstein came to their aid and helped to get the charges dismissed. Moving to Europe, the Teutonic Knights existed until 1809 aiding in battles, when Napoleon formally dissolved the organization. 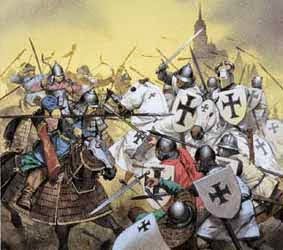 The Hospitallers were founded with the purpose of healing around 1080 led by Gerard. The group originally began as a charitable hospital but eventually became a paramilitary order. They were supervised by Benedictine monks and the Church of the Holy Sepulcher. Once Gerard passed away in 1120, the Order shook off its overseers and was therefore an independent group. The Hospitallers did branch out setting up hospitals in Europe. Members, male and female, were recruited from the nobility until after the thirteenth century, when the wealthy from any class were welcomed.  The qualifications were simple: be a free man, healthy, legitimate, debt-free, and spiritually-clean. Young boys could join as Novitiates. In 1292 this changed due to financial problems. Once Acre fell, only the Grand Commander out of Spain could accept new members.  One of the most famous Hospitallers buildings is the castle, Krak des Chevaliers.  Once they were ousted from Jerusalem, the Knights moved to Cypress then to Rhodes where the group still exists to this day. 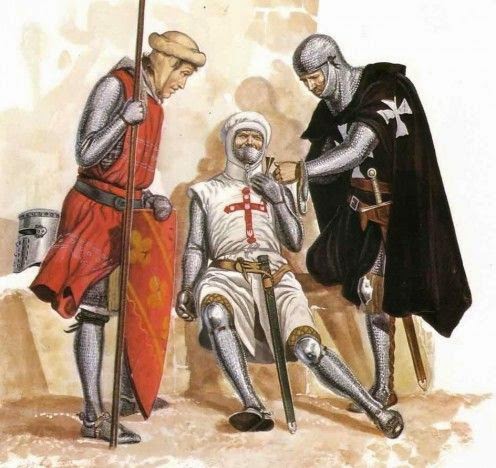 The Templar Knights have their origins in 1119 after Pope Urban II called for the first crusade. A small band of knights in Jerusalem under the leadership of Hugues de Payens the Count of Champagne, establish an order devoted to the protection of pilgrims and sacred places in the Holy Lands. Hugues companions were Geoffrey de St. Omer, Payen de Montdidier, Archambaud de St. Agnan, Andre de Montbard, Geoffrey Bissal, Rossal, and Gondameer. They took up residence in the Church of the Holy Sepulcher.  King Baldwin II (r. 1118-1131) granted the order the Temple of Solomon as a home base.  Unlike the Teutonic & Hospitallers, the Templars were a religious order under the ultimate jurisdiction of the Catholic Church. Women were allowed to join as Sisters, but they had no active role in fighting – serving a supportive role. 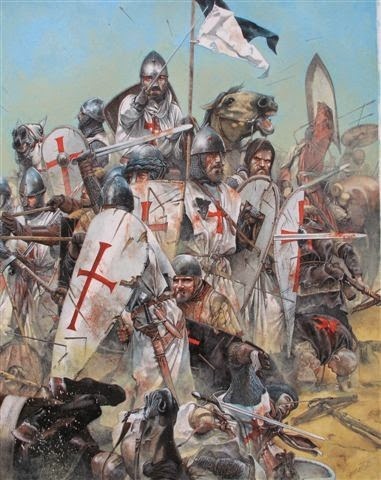 All three of the Orders were respected for their devotion to duty. They all set up Houses through-out the Middle East and in Europe. The Templars established the world’s first banking system. Many of the facilities outside of the Holy Lands served to supply the Orders with food, clothing, horses, and recruits. On the 4th of July, 1187 the Battle at the Horns of the Hattin resulted in a large number of Christian Knights led by the Templars killed by Saladin’s army. Why King Guy decided to move ahead to an area with no water in the heat of the summer was anyone’s guess. Saladin ransomed the knights of noble birth, executed Reynard de Chatillon along with any Templars & Hospitallers knights. Some Crusaders not worthy of ransom were either sold to slavery or killed.

The Templars will ever be associated with a mysterious treasure and the Holy Grail. The Order of the Temple came to a terrible end when on 13th day of October, 1307 King Phillip IV of France ordered the arrest of every Templar Knight on trumped up charges – all told up to 5000 men. The Grand Master, Jacques de Molay wasn’t spared the Inquisitors. After suffering through torture, Jacques was burned at the stake. Jacques foretold the death of King Phillip and Pope Clement V, the co-conspirators. It was said that some of the knights managed to escape with the splendid booty accumulated over two hundred years.  The remaining Templars fled, some going to Scotland while others went to England. The organization still exists today.

Stay safe out there!
Posted by Greycliffs Chronicles at Friday, October 17, 2014