This past Saturday, February 21rst, the San Jose Sharks played the Los Angeles Kings at Levi Stadium. This was the first outside (stadium) game in which San Jose participated. &0,205 fans packed Levi Stadium to watch the Northern California Boys of Winter play their Southern California rivals. 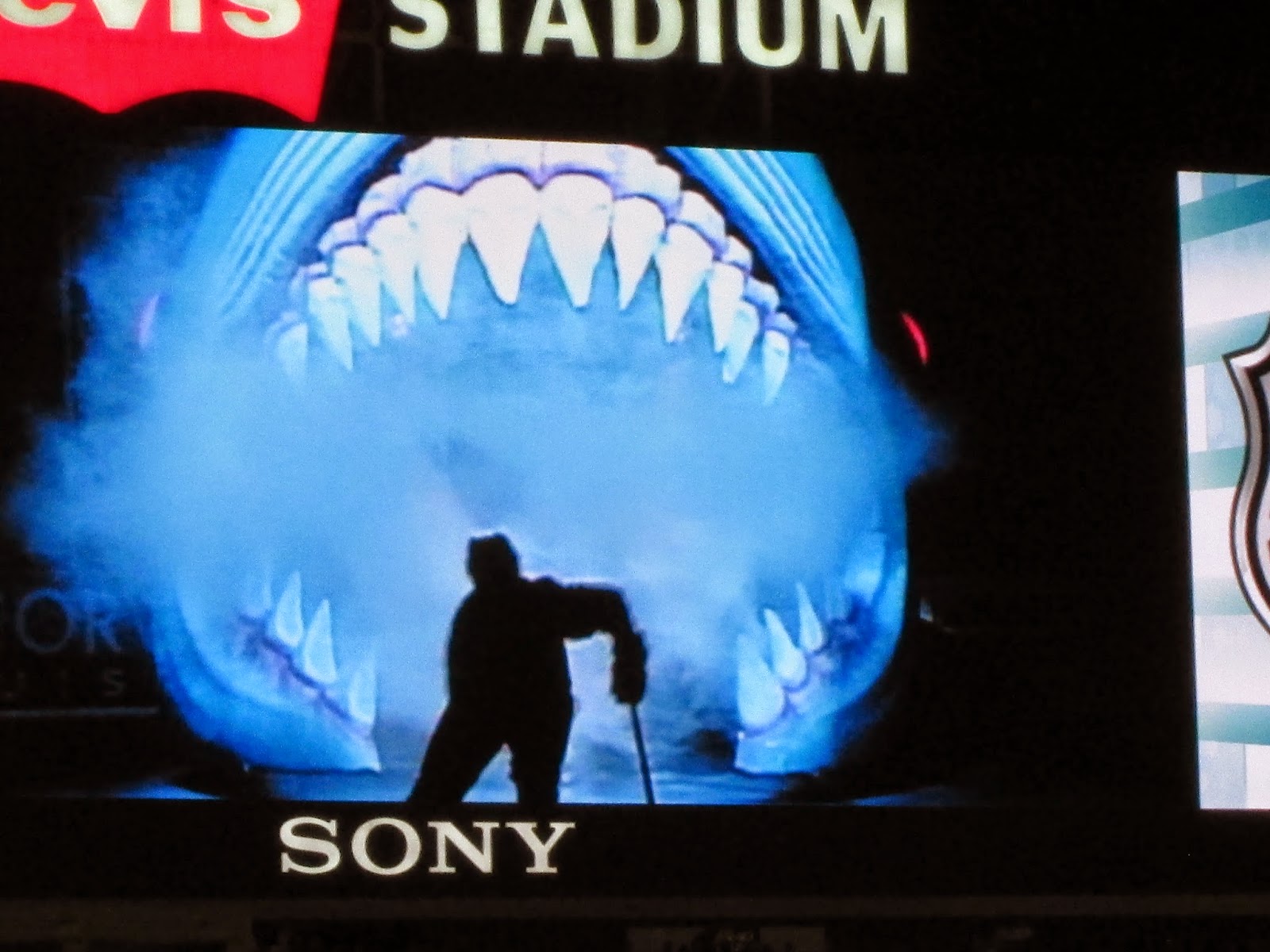 I was there! My son, Sebastian, and his friend, John, were my hosts for the experience.

The day was unbelievable with perfect weather. Before the game or events began, we took a side trip to the SAP Center. Disney-On-Ice was the featured even and we were surrounded by hordes of pint-sized humanoids wearing Princess costumes. Yikes! Among the first inside the official Sharks store, we spent WAY TOO much money on souvenirs. It was then decided we should eat before the game. I wish I could remember the name of the Mexican restaurant but I didn’t write it down. The eatery had very good Pina Coladas, though! John is a Pittsburgh Penguins fan, (we'll forgive him for that). He wore his Penguins jersey to lunch. The catch phrase of the day was "Appropriate Attire" after we teased him about not wearing teal. He did purchase an official Sharks Stadium jersey and had it on for the actual game (hence, the appropriate attire).


Deciding against driving due to the cost ($50.00 per car), we chose to take the Santa Clara lite rail. Most of those on the train with us were proudly wearing their teal. A few Kings fans hid in the corners, hoping they wouldn’t get heckled by us Sharks fans. Arriving at Levi Stadium, we were amazed on just how many people were there waiting. The gates didn’t open until 3:00pm. 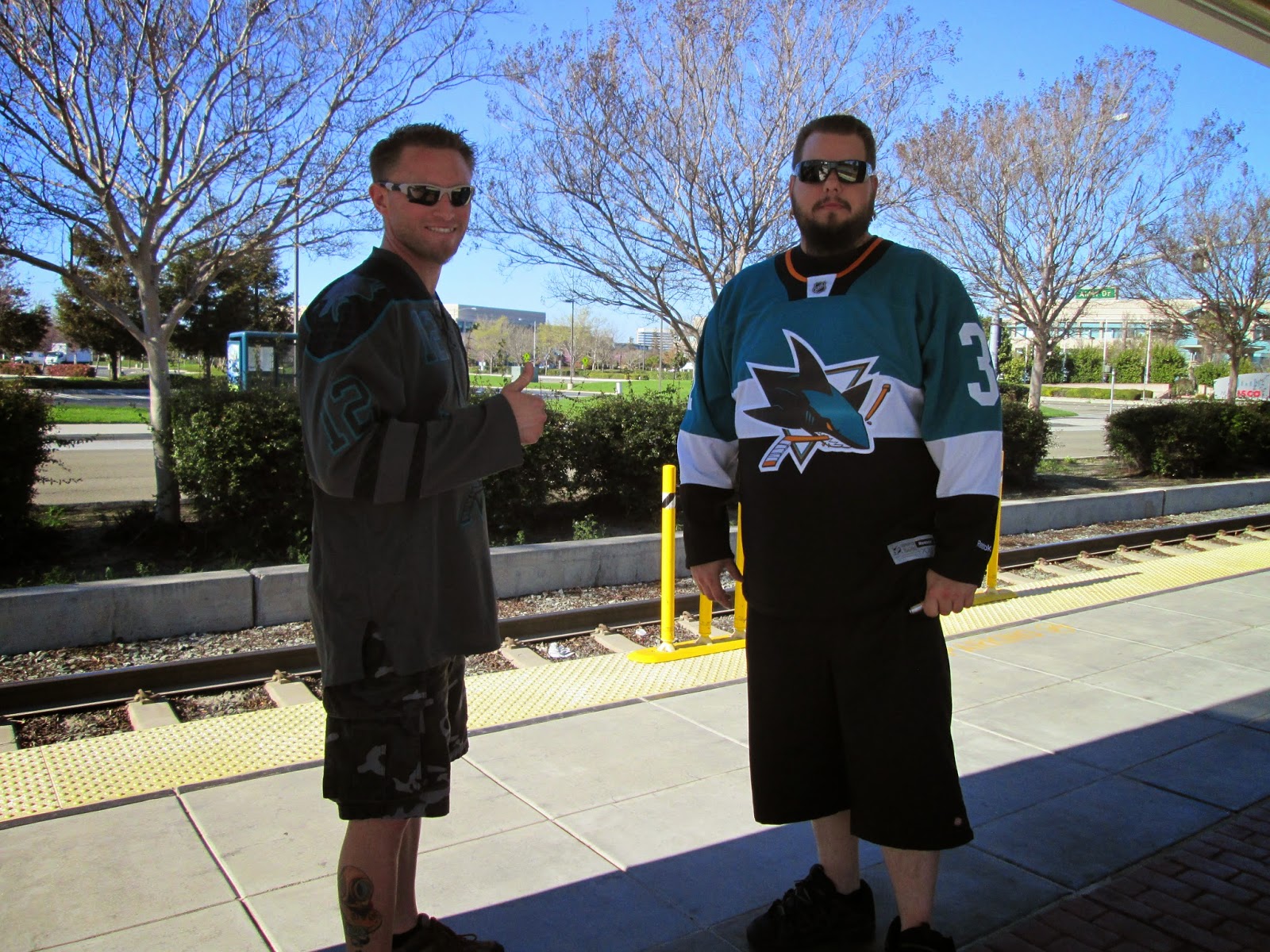 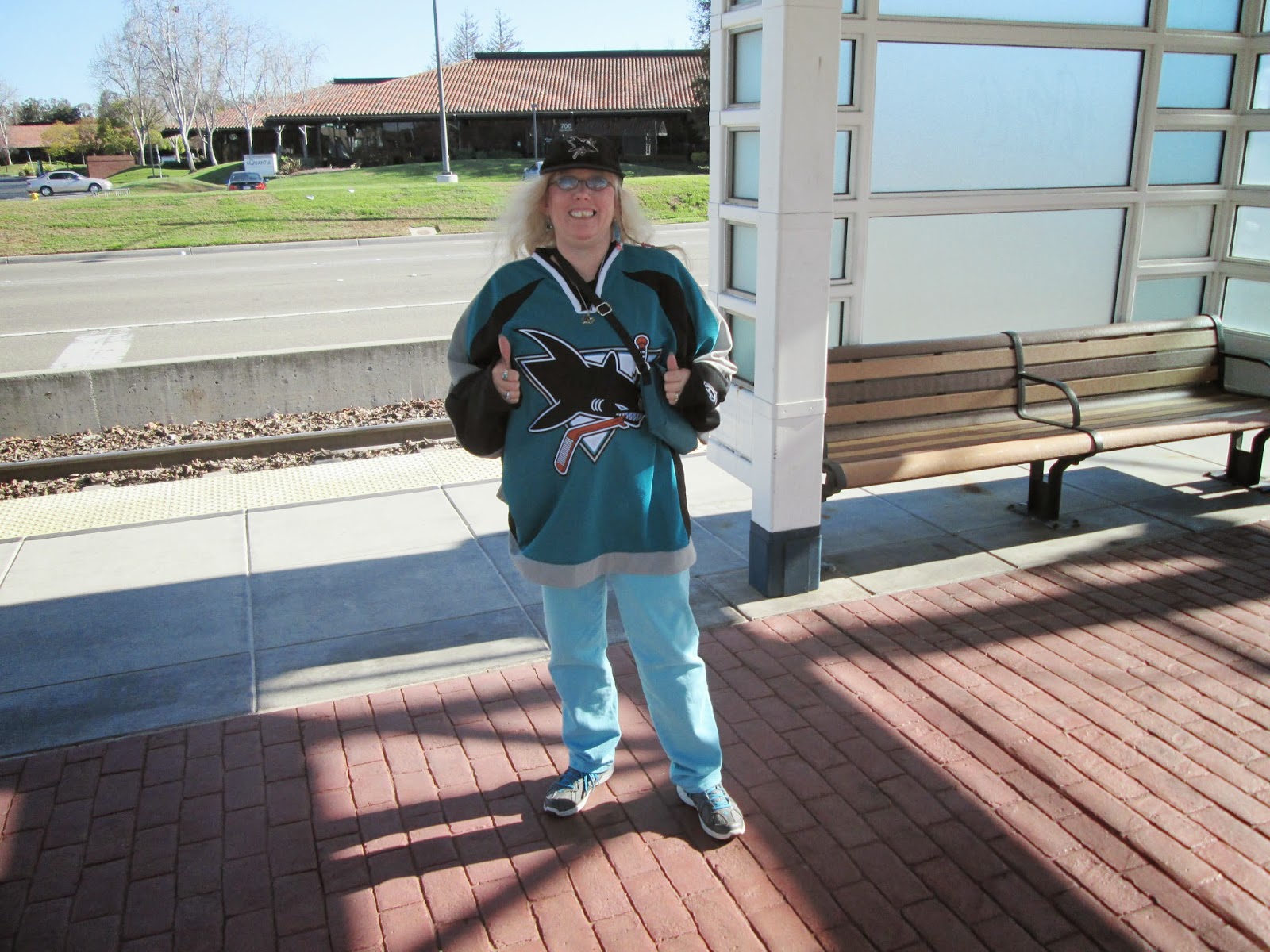 I just loved how creative folks were with their homage to San Jose. Some fans had home-made Sharks outfits while others painted the faces (and in a few cases, their heads). Everyone was smiling. I lost count on how many SJ fans I chatted with, never even knowing their names. We were all glad to be part of San Jose’s experience. 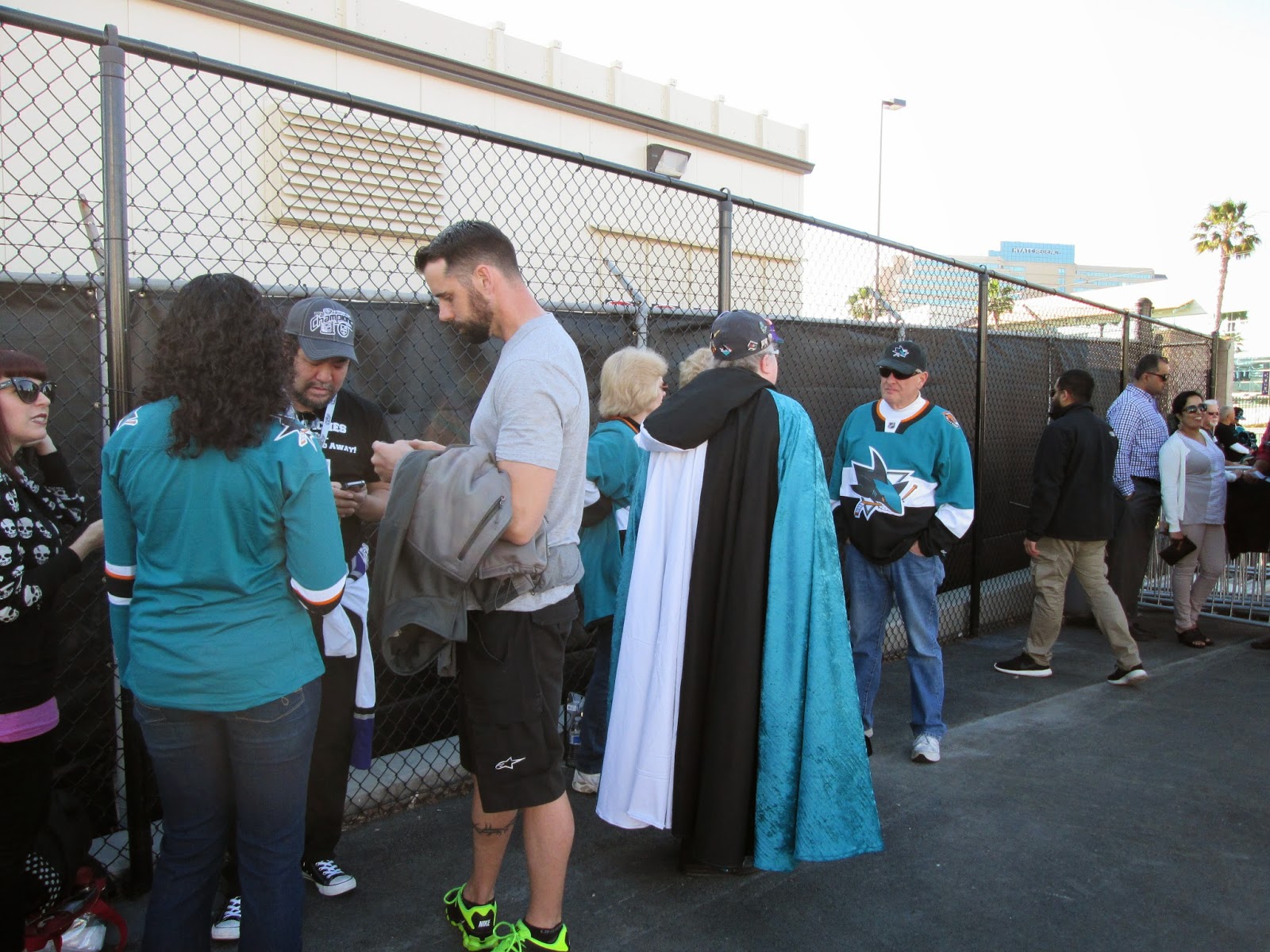 Kudos to the NHL, Sharks, and Kings organizations for having lots of things to do for the fans while we waited for the game to start. We wanted to have our photo taken with the Sharks Head (of which players enter the rink for games) but the line stretched to Europe. We almost had pictures taken with SJ Sharkie but he had to do other things just as we made it to him. Darn! We did take photos with a giant Sharks sweater (hey son, are you going to post that pic?). The next stop was the fan shop, where more Sharks memorabilia left in a large bag. 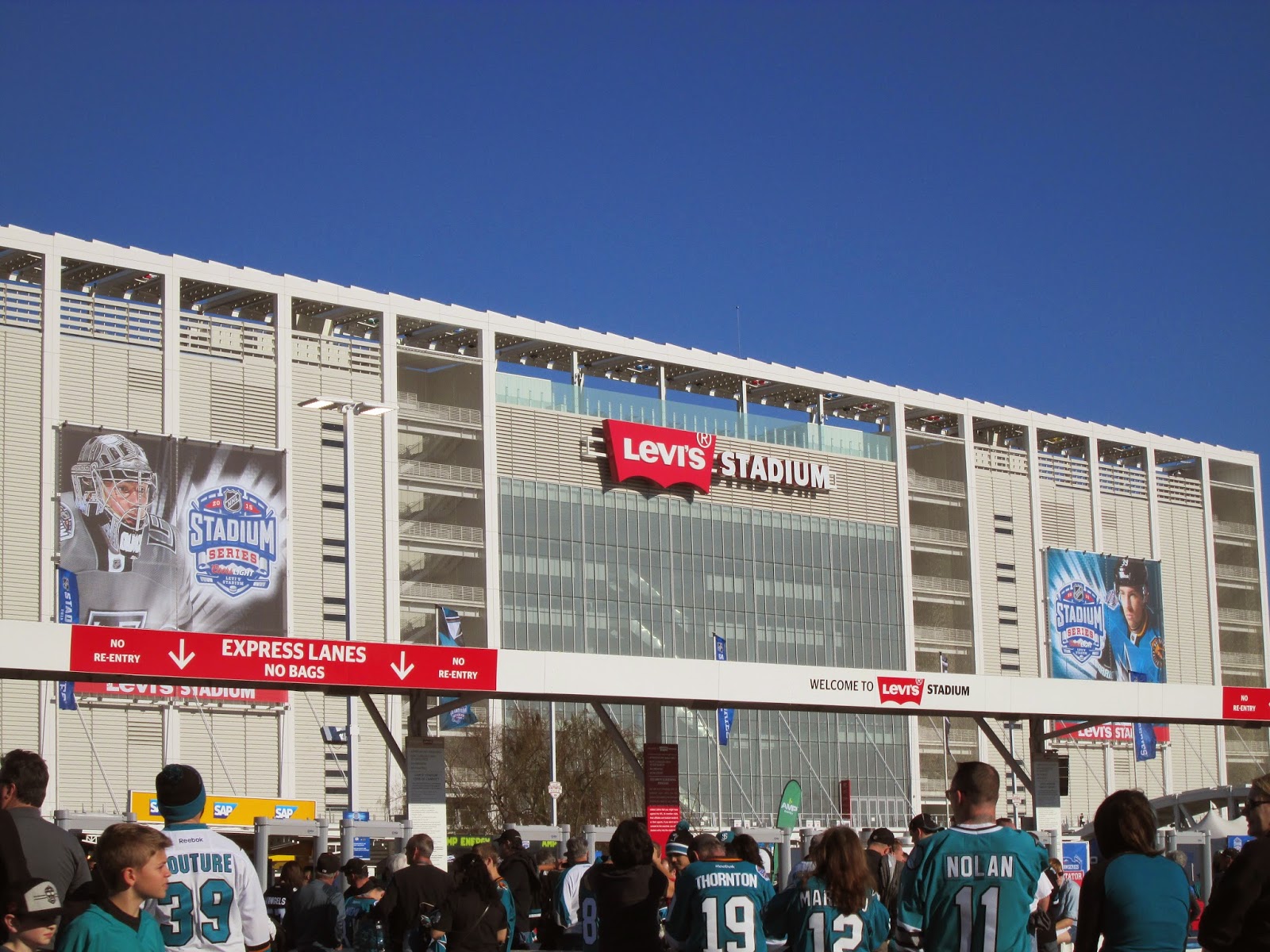 When the staff let us inside the arena, we found out seats. The guys did well in selecting some great seats. We could see the entire field. Part of the set-up included a lake with a bridge with fins in the water. The large screens were showing highlights fro previous outside games. 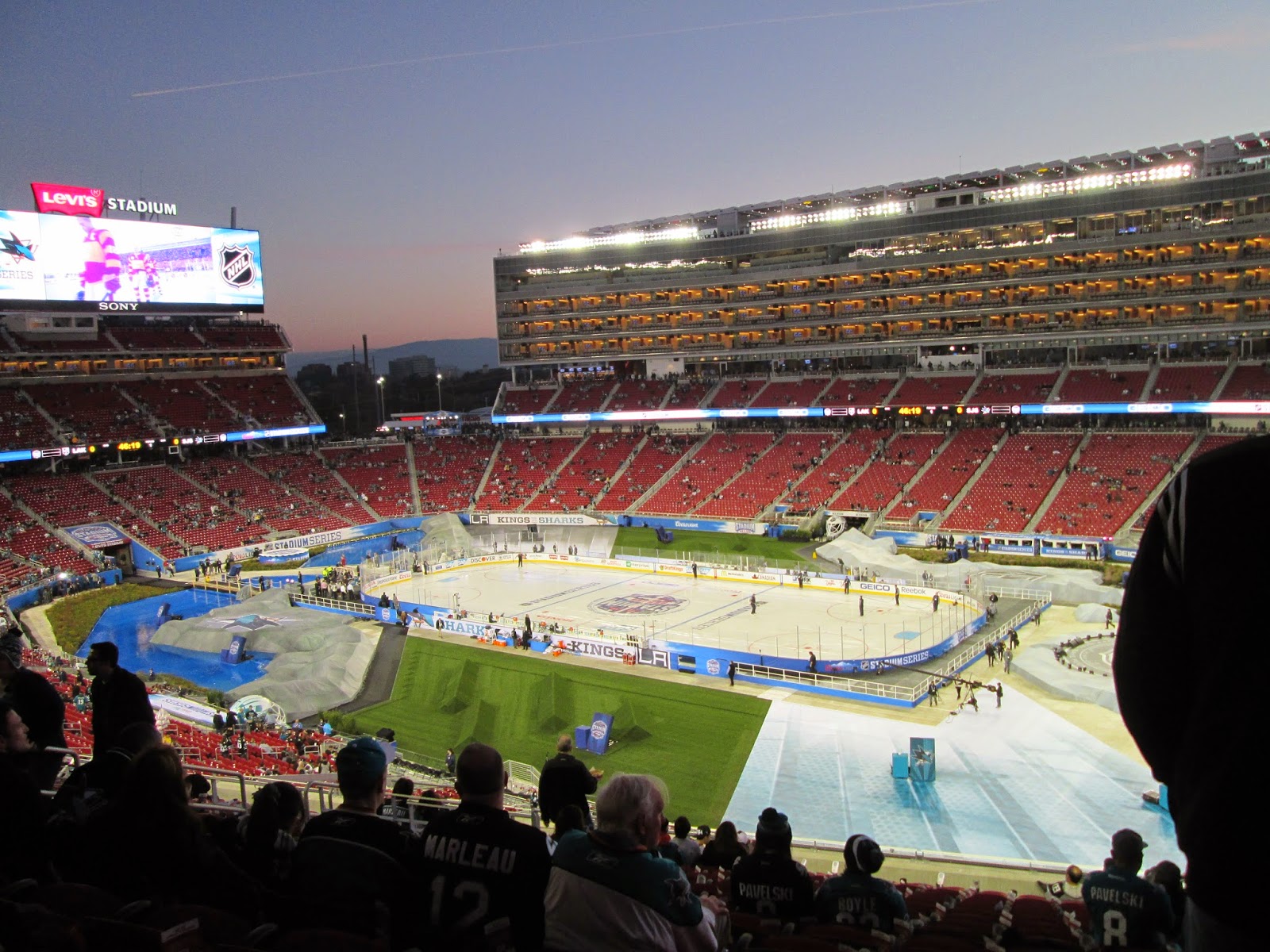 San Jose entered the arena for their pre-game skate and the crowd went wild. Each player was shown on the screen with their corresponding number. After the skate was competed, they guys left to go back to the locker rooms. About this time, the sun started its slow descent to the horizon. 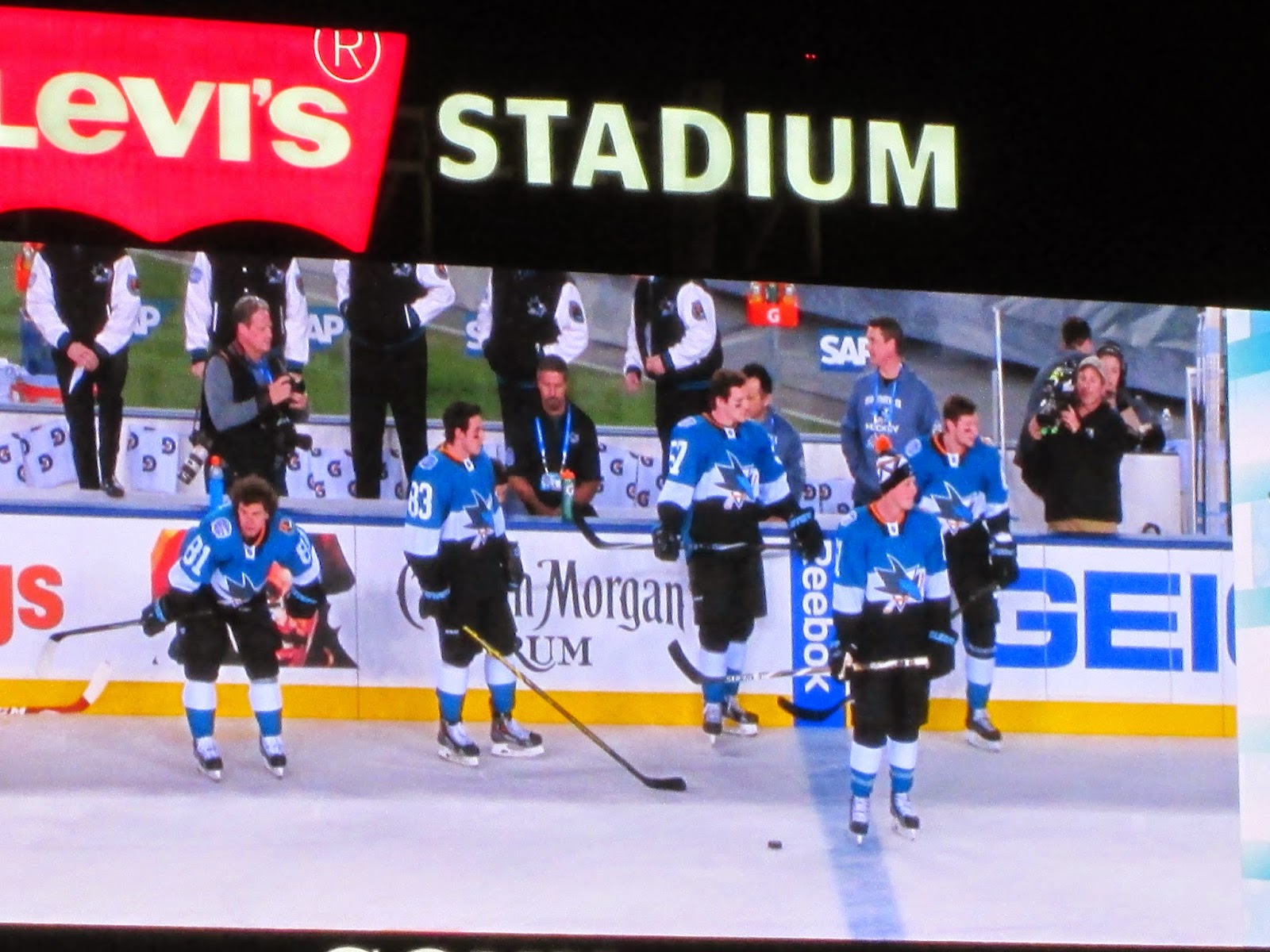 Chris Allen sang the National Anthem. As the song played out, staff unwound a huge American Flag over the crowd and fireworks went off. A group of San Jose Sharks alumni was introduced, including Owen Nolan and Mike Ricci. Very cool. Later, John Fogerty played a set and the final intermission was highlighted by Melissa Etheridge. Fogerty gave an amazing show. 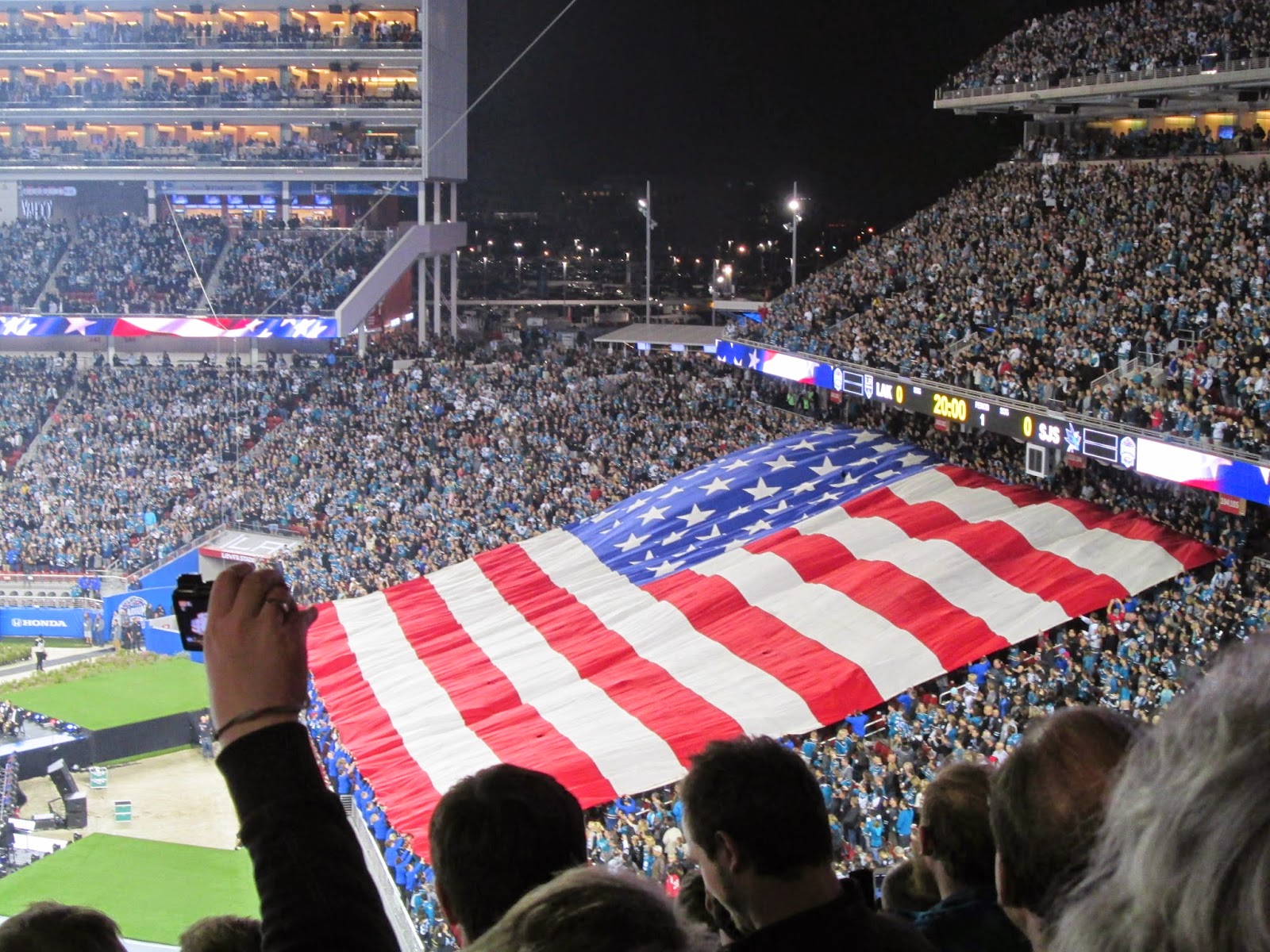 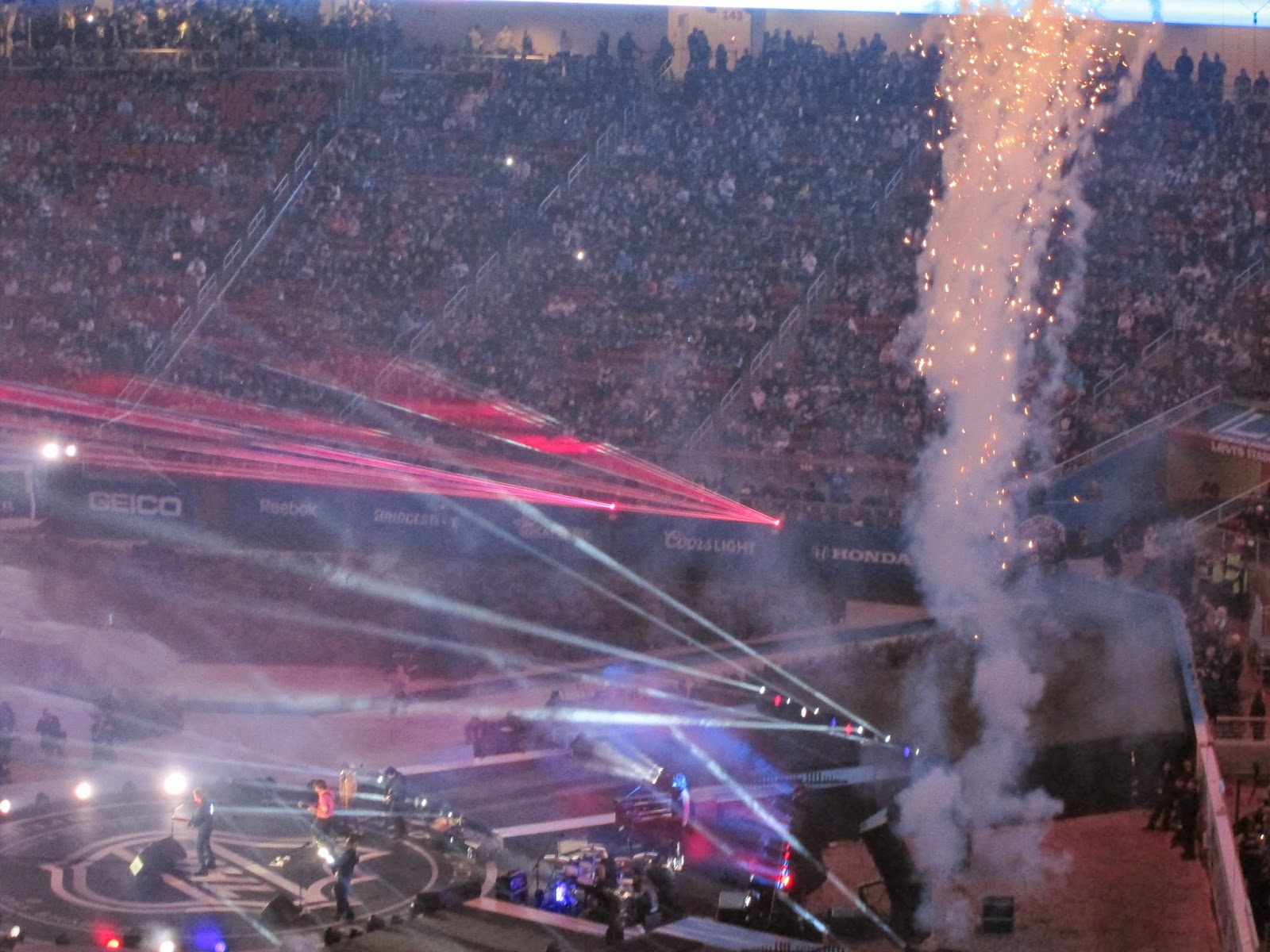 At the start of the game, we were able to see and hear the action. LA’s Kyle Clifford tallied the first goal in the 1rst period. Brent Burns tied it up before the buzzer sounded to end the first period. La’s Marian Gaborik earned the game-winner in the third period. It was disappointing that our team lost, but we had a great time. I liked the Sharks sweaters but wasn’t crazy about LA’s. 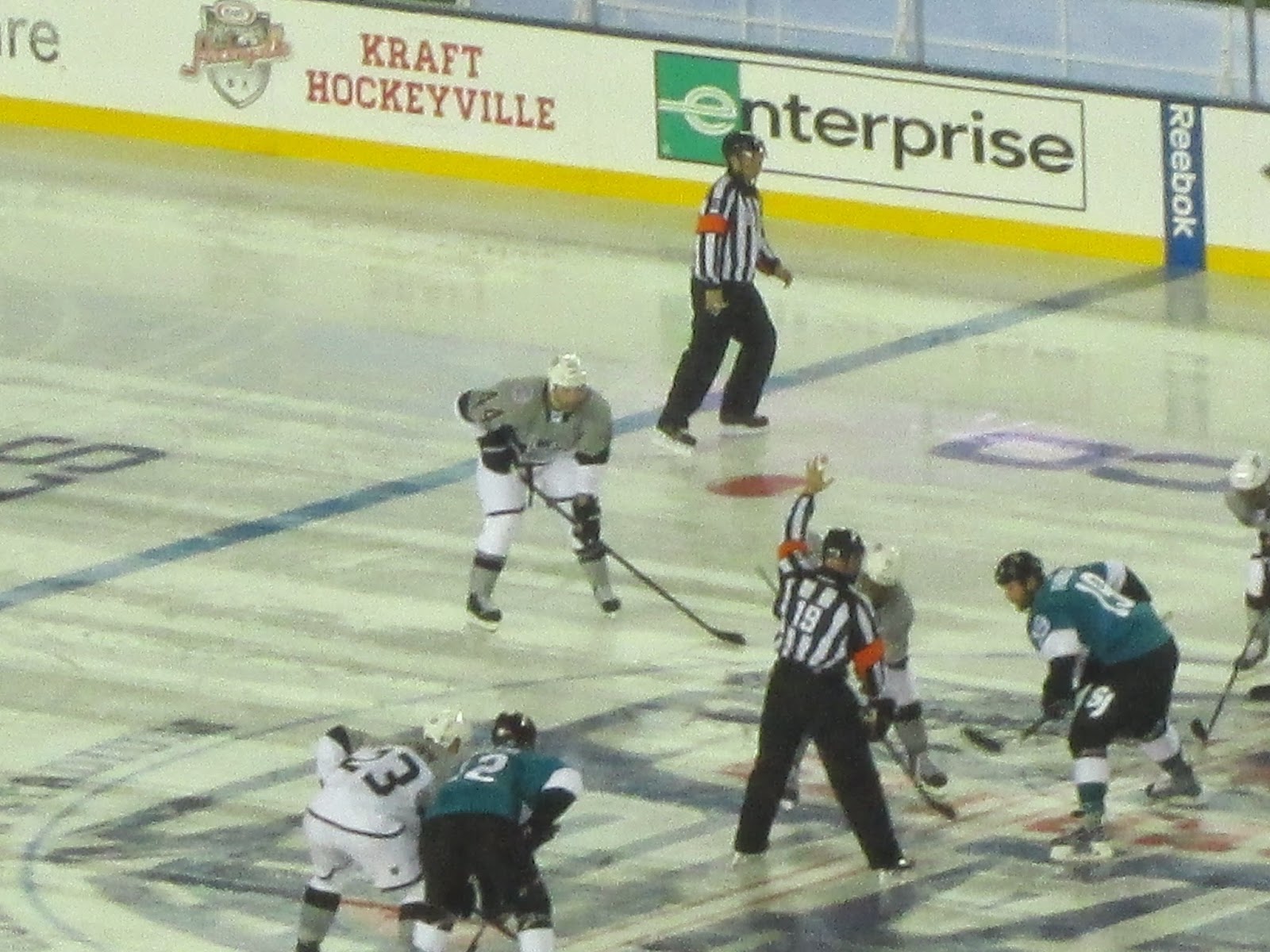 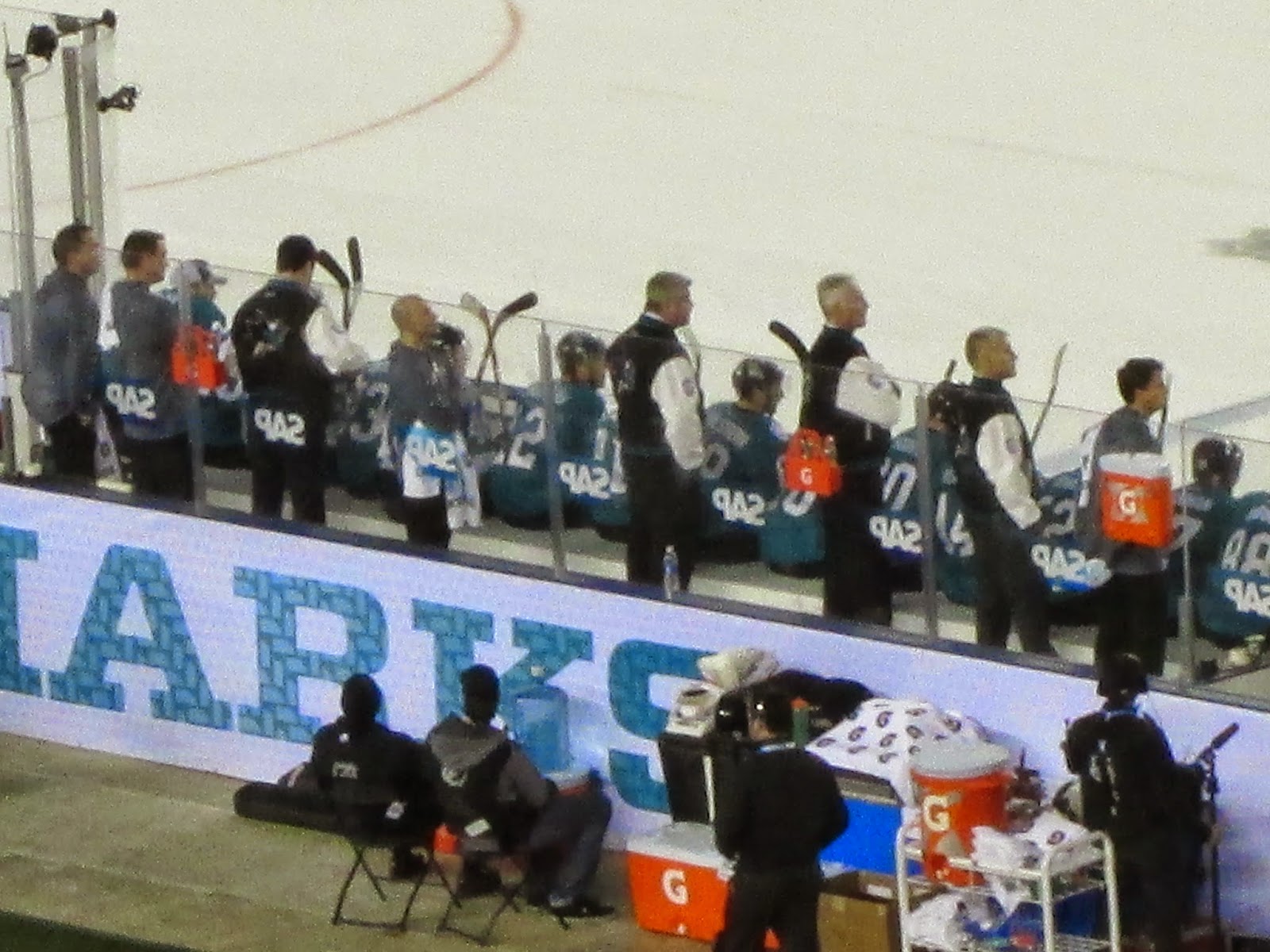 When the game was over, the fans overwhelmed the lite rail. A mass of people waited for trains. VT finally started utilizing buses to help get the crowd home. The nest day, after stuffing my backpack FULL, I made the trek to San Jose International Airport to fly back t Reno. Both to SJ and back to Reno, I used Alaska Airlines. I would recommend the service to anyone. The folks are so helpful and very nice. It was a little bumpy going over the Sierras. Cabbing it home, I took a quick nap and headed to work. It was nice to see the San Francisco Bay again, even if it was from 65,000 feet. 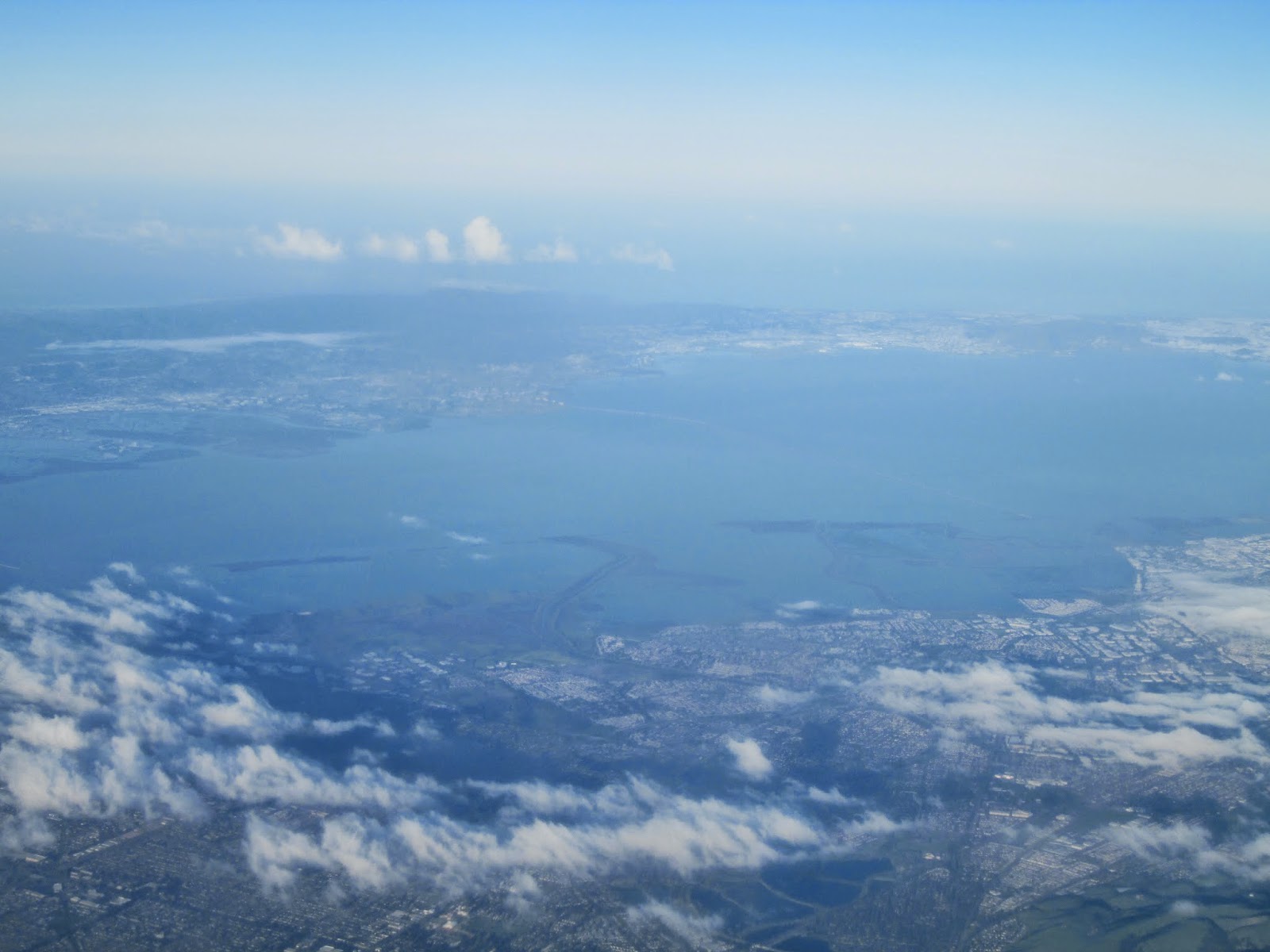