How many of you collected model horses are a child? I did and still have a collection, albeit not as big. The primary difference between what I had as a kid and what I have now is the condition and worth of my horses. I don't play with them. Half of my hordes are "vintage" and others are new. I still enjoy each one. I prefer Breyer-Reeves horses but won't turn down a nice Hartland. There are other manufacturers (Peter Stone, Haken-Renaker, etc.) that produce horses and I no longer look for Marx horses (I do have a couple, though.

Hartland Plastics, Inc., was based in Hartland, Wisconsin. The company made models from the mid-1940’s to 1969 of horses, horse/rider combinations, dogs and other subjects.  Another firm, Durant, bought and made Hartland models until the 1970’s. The company was sold to Steven Manufacturing, Missouri after a 10-year hiatus. They were joined by Paola through the 1990’s. The original Hartland started out making baseball statues. Eventually, Hartland made a large assortment of figures including religious icons and decorations. Hartland horses come in two basic models:  those destinated for riders and horses alone. The stand-alone horses look familiar to collectors today, resembling Breyers-Reeve models although the Hartlands came first. Horse made for riders either came with fixed reins or holes for reins.  Hartlands are still available, but not the same variety as Breyer-Reeves. Gail Fitch has an extensive website about Hartland and sells reference books. 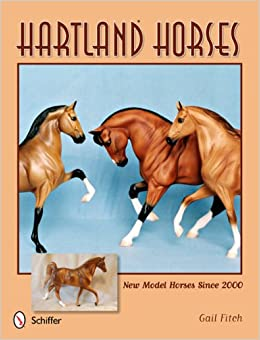 Breyer Animal Models started in 1950. The first animal made was the Western Horse clock for the Mastercrafter Clock Company (Breyer kept the mold for future use instead of payment) and sold by C. W. Wenthworth Co. Later, Mold #57, the Western Horse was based on the clock.  When Reeves International bought Breyer in 1984, the company became Breyer-Reeves and operations were set-up in New Jersey. The company is still Breyer-Reeves today, but most folks refer to them as Breyer. A group of folks put out a Breyer Animal Collector’s Guide in the 1990’s to early 200’s. You can sometimes find used copies online (authors are Felicia Brown, Kelly Korber-Weimer, and Kelly Kesicki).

How do you tell a Breyer from a Hartland? Both companies made similar models, and in some cases, even the model colors were alike. Hartland horses have their mane falling on right side of their necks while the Breyer-Reeves horse manes come down on the left side (mostly this was for the early models). Next check for a company mark. Breyer-Reeves are stamped on the inside on the hind leg. Hartland models have more detail to the stamps and the mark depends on when it was made. Gail Fitch’s book on Hartland horses details the marks. 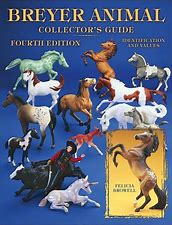 Breyer branched out with the horses making items available in Traditional, Classic, Paddock Pals, and Stablemate sizes. Mini-Whinnies were added later. Hartland kept to two basic sizes.  Once Breyer designed came up with a new model, later editions would come out in various colors. Each Breyer model/variation is names and issued a number. 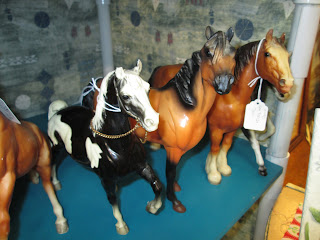 People often ask me how much I think model horses are worth. Guidebooks estimate worth, usually based on excellent or near excellent specimens. The number manufactured, specialty coloration, and in Breyer’s case, figure issued for Breyerfest or online, may affect prices. Bottom line: a model is only worth what a buyer is willing to pay, no matter what the seller believes it should sell for.

Below I have included some websites for reference. Book on collecting model horses can be found through used book sites or occasionally in used book stores. 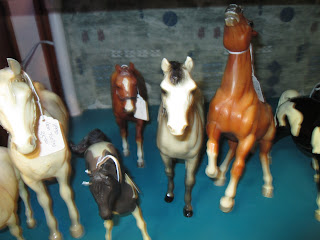