The nice part about developing my own world for my novel was the freedom to place characters in clothing of my choice. I was able to take mix and match medieval periods to create my ‘own’ fashion, not worrying if I was breaking any rules. In reality, many of us already have pre-conceived notions of period wear should be courtesy of Hollywood: never mind that Tinsel town oft gets their facts wrong. Really, knights from the ninth century did NOT wear plate armor. Corsets have been known as part of cloting attire as afr back as the Greeks, where anthropolists found evidence of the garments among the ruins. The true bra, however, wasn't invented until 1889.

What did the A-Listers wear to the Queen’s Ball? Did peasants really wear rough homespun? Who started the fashion craze?

Men and woman tended to stick with what felt good to wear and fit best prior to the eleventh century. The Greeks and Romans had favored togas or tunics. The French & Normans called the short tunic a Cotte. And the longer garment a Robe changed and became even longer, becoming the Surcoat. The garments could be worn loose, with short or no sleeves, allowing for freedom of movement. A man need only add a leather vest or maile shirt over a gambeson before going to battle. Women, on the other hand, lengthened the fabric. Both tunics and surcoats could be made with splits on the sides to make it easier when riding.

The Anglo-Saxons and later the Normans took the draped fashions of the Romans and elongated the gowns. With the change in fashion came a change in culture: both men and women had to walk with deliberate steps to keep from tripping over the excessive clothe. The sleeves, also becoming longer, forced the owner to hold in her or his, elbows in close and even keeping one hand on a hip. This gave the impression of being ‘graceful’. Women’s gowns were laced at the waist and the sleeves tended to close fitting near the wrist. The Bliant was brought back from the Middle East by Crusaders. The top half was form-fitting, the waist had wrapped fabric with a curved line around the body and below the waist the fabric was a loose skirt, in gathered or pleated folds. The outfit could be buttoned, laced, or hooked to secure it to the wearer at the back. Bliants had long, wide sleeves. With some variance due to fabrics, women adopted a ‘corse’, which was a precursor to a corset, to support the bust.

One garment described as being worn by King William I of England was a shirt made of a fabric called chainsil, a very fine type of linen. A Jube was a overshirt made of fine linen or silk, often embroidered with fancy designs at the edges.

Highborn, or nobles, also wore mantles which resembled cloaks and were made of wool or silk depending on the occasion. For outdoor use, the wool mantles were fur-lined The mantles were held together with a fibula (a clasp) - or tied with cords. When cords were used they had decorations at the ends. The clasps or metal decorations could be made of silver or gold inlaid with jewels.

Chausses, or hose, were worn on the legs. The wealthier a person, the better made chausses  he or she wore. Common materials used included homespun, cloth, linen, cotton, wool, or silk. Braies, or linens, were the medieval equivalent of medieval undergarments for men. In the late eleventh century the lower classes, Knickerbockers came into vogue. Knickerbockers resembled soccer shorts. These were worn by working men in place of or over braies. A longer style pant was also worn by peasant men. Valuables were carried in pouches called Gypsire or Gypseres which had a long strap, this allowed the pouch to be held over the shoulder or over the head (much like women do with purses today). The picture below shows a man wearing braies. 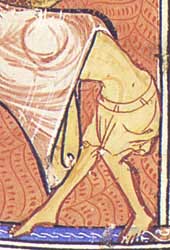 Matilda, wife of King William I of England started the fashion of wearing Girdles, a corded belt worn around the waist which was tied in front and hung down almost to the floor. The girdle could be made of various materials, including precious metals inlaid with jewels or enamels and connected by twists or knots and ending with tassels. The girdles might be double-wrapped. In the example below, you can see the girdle around the woman. 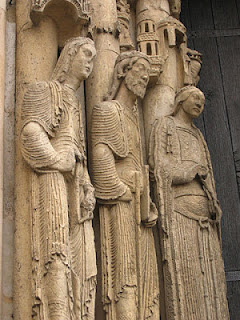 Women wore an undergown called a Camise, which was basically a slip made of fine linen. Veils covered their hair, held on by bands made of different materials. Veils could be made of gauze, silk, chainsil and possibly embroidered with metallic or silk thread. In addition to the veil, a Couvrechef, or head cloth, was worn. This piece of clothing draped the head. The sides covered both parts of the face and went around the neck. The medieval women were pious and believed in covering their hair. Between the veil and couvrechef, only the face was visible.

Clothing wasn’t dull. Cloth was dyed, embroidered, and embossed with precious metallic threads, jewels, enamels, and other decorations. Fur, lace, silver & gold thread and tassels edged hemlines for all classes of people. The picture below is of Geoffrey of Anjou, the father of King Henry II. 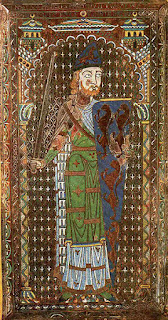 In England, it wasn’t until the fourteenth century that sumptuary laws placed restrictions on clothing. For example, ermine was relegated to the Royal Family only. In the mid-16th century, no one under the rank of viscount could wear sable and black genet (civet) became to sole realm of the Royal Family. 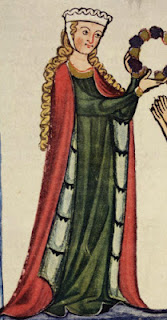 Queen Eleanor of England and Duchess of Aquitaine, was a woman to be reckoned with. A trend-setter, Elanor wasn't afraid of gossip. Other women followed the Queen's lead. If Eleanor wore brocade or silk, so did the other highborn.The picture below shows a simple gown worn by the woman, with varying styles by the men. 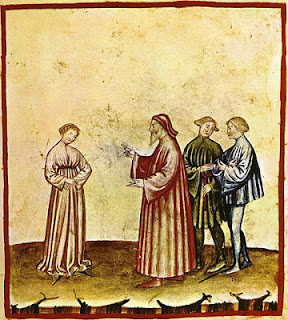 Merchants in the trades eventually banded together and formed guilds. In the thirtieth century, Flanders was home to many of the guild headquarters. The guilds set prices, weights & measures, quality differences, contracts to purchase raw products in bulk, and even regulated work stoppages. A young man, or woman, would join as a young apprentice and work his or her way through the guild system up to a master level. The Guild was the original Union.

stay safe out there!
Posted by Greycliffs Chronicles at Wednesday, May 08, 2013