Sharks fail to move on: no Cup for San Jose

No, Mr. Peabody didn't turn on the Wayback machine. Once again, our San Jose Sharks fell short and were eliminated in the post-season play-offs, this time by the defending previous season Stanley Cup winners, Los Angeles Kings.

Disappointed? You bet I am. I was ready to put on the teal make-up, wave my teal & white pom-poms and head to San Jose for the victory parade.

Another year of keeping up with signed team pucks.

What's a Sharks fan to do?

Logan Couture felt so bad, he actually tweeted an apology to us (the fans). Heartbreak. "Sorry to all of our fans. We didn't get the job done. Thanks for the continued support" Further tweets were definately down, with 'Today sucks and 'f' this". the day following the loss.

Coach Todd McLellan said he wasn't happy about the loss, but he was pleased with how the team played. Really? Come on Todd, you LOST! You were SHUT OUT -  TWICE! Is that really playing well?

Jason Demers tweeted "Tough way to go! Boys played their hearts out! Bitter taste!! Sorries and thanks to all the fans who have been amazing throughout this year!"


TJ Galiardi said "Toughest loss of my life tonight... We left it all out there all playoffs but it still hurts to be eliminated. Thanks for all the support."


Antti Niemi played his heart out, as seen by the low goals against through-out the post season series. His numbers are not only one of the reasons San Jose made it to the play-offs, but why he is onle of the three Vezina candidates. 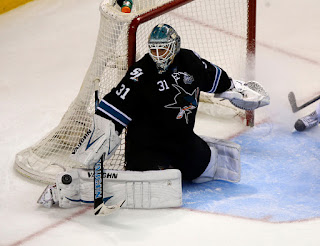 Which familar faces will we see in the teal, white & black next season? Will Antti Niemi win hardware for his masterful gaurding of the area between the pipes? How long will it take before the League hands Raffi another reputation-only suspension?

And, just how long does it take to set up and freeze the the sheet of ice at the Tank? I don't know but a rink without ice is just sad. 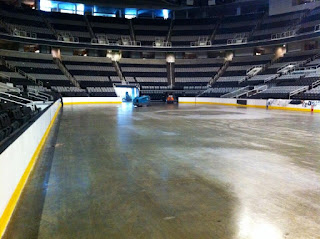 Three months without Sharks is a long time. At least we will have a normal 82 game season for the next six years thanks to the new CBA. A full schedule under the new structured league should be interesting. Maybe it will bring the team better luck, and Lord Stanley'd Cup.
The Sharks and the Sharks fans can only hope.


Announcer Randy Hahn tweeted  "Thanks to @SanJoseSharks fans everywhere for their passion and loyalty through this roller coaster season and 11 remarkable playoff games!"

Sure, it is always nice to be appreciated, whether that acknowledgment comes from the Sharks Owners, staff, players, or media. Thanks - we like you too, win or lose.

A couple of tidbits to pass on...

Have a great summer guys. Get healthy and see you for pre-season.

Go Sharks and stay safe out there!
Posted by Greycliffs Chronicles at Saturday, June 01, 2013