Today I went on a black bear release. For those of you who don't live in a rural area, wild animals don't move just because you decide to put up a house in their territory. Large cities, urban area, suburban neighborhood, and rural communities play host to many animals. Wildlife has adapted to people. Two of the most commonly seen and adaptable critters are raccoons and deer. These two mammals can be found through-out the nation. Deer are seen wandering around towns, often munching on new lawns or flower beds - and, your vegetable garden. Coyotes have been seen in the largest cities, coming down from the foothills, hanging out in parks near garbage cans or picnic areas.

The biggest concern for many of the people I talk to over the telephones at work are predators: bobcats, mountain lions, and bears. It is surprising how many people call in with sightings of 'mountain lions' that turn out to be domestic cats or bobcats. Bears aren't mistaken for other creatures, as coyotes could be for wolves in some parts of the country.

Human-wildlife conflicts happen when we (people) stubbornly force our urban lifestyles on Nature's creatures. Moving to a new area, especially a suburban or rural section, one should  find out what types of animals you might come across. What actions are recommended by your State Wildlife (Fish & Game) Agency should such an encounter occur? What does the agency suggest to discourage visit by these animals to your property?

A few suggestions to think about ahead of time:

1) Bears, and other animals, are attracted to a source of water. Keep this in mind of you put in a pond (especially if you have Koi - a potential food for them).

3) Bee hives can be an attractant. Consider an electric fence around the hives as a protective measure.

4) Fruit trees and/or vegetable gardens will attract bears and other wildlife. Again, an electric fence is something to consider. Check with your local agriculture office for height recommendations (deer are champion jumpers).

5) Keep trash cans secured in a bear box or in the garage. Don't put them outside until the morning of the pick-up if you keep the cans in the garage. Keep dumpsters closed. Check to see of your area has ordinances on trash that might be used against neighbors / business owners failing to secure trash.

6) Clean BBQ grills after use.

7) Don't keep any food in cars. Bears have very sensitive noses and it is said that they can smell a pack of gum in a car.

The Nevada Department of Wildlife (NDOW) had information of human-wildlife conflicts and living with wildlife on it's website (see end of blog). In Nevada, we have a bear hot line 775-(688-BEAR). We document calls, respond wardens and/or a biologist and depending upon the situation may set a trap. NDOW bear traps are very distinctive, with warnings on the outside. 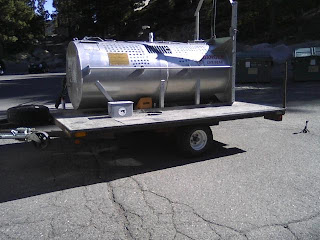 Once a trap is placed, we wait until the bear is caught. This can take a couple of hours or a week. Once that happens, the animal is processed. Processing a bear includes documenting its sex, weight, age, taking a blood & hair sample, placing a radio collar around the neck, and clipping on a tag to one of the ears. After that is done, the bear is given 'aversion' training.

Aversion training teaches the bear to avoid humans. As the bear leaves the trap, a Karelian Bear dog chases the animal, barking and nipping at it. A Game Warden or biologist shoots at it with rubber bullets (it doesn't hurt the animal), and if necessary, another person will spray the bear with a special blend of pepper spray. The bear will either run off to the woods or go up a tree. Currently, the animal is released back to its normal territory, as taking it somewhere else doesn't work. It was discovered the bears travelled back to their home range.

Below is a picture of Rooster, a Karelian Bear dog. His job is to harass the bear as he/she exits the trap. Think about this for a minute: unless you are an Olympic-class athlete, you CAN'T outrun a bear. The bear today, a female, was fast. She could have outran a racehorse. Of course, I guess being chased by a dog while getting shot at could have had a little to do with it...still, the video of another release doesn't give the speed of these animals justice.

Remember the joke about the two divers in the water? One turns to the other and asks his buddy, "How fast does a Great White Shark swim?" His friend says, "I have no idea." The first guys then says, "What do we do if we see one?" The second one responds, "I just have to swim to the boat faster than you."

So, I stood off to the side, away from the crowd, with some cover. The way I saw it, standing close to the bear was like walking up to a house in Oakland and standing in front of a window. Only rookies did that.

She lit out of the trap with Rooster hot on her heels and headed for the river. One of those blink and you'll miss it moments. We had to wait around for Rooster to come back, which he did, wagging his tail with a big doggy grin. 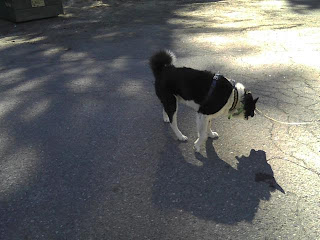 Will I go out again? Darn sure I will. Next time, hopefully the other photos will come out other than a blur.

Below, I have attached links to two videos. One is a bear release and the second one is a video of a mountain lion release. A link is included to the NDOW Karelian Bear dog site. Biologist Carl Lackey is trying to gather support (by getting 'likes') to outfit Nevada Game Wardens with their own bear dogs. These animals can also be trained in other aspects of law enforcement K9 work.

Stay safe out there!
Posted by Greycliffs Chronicles at Thursday, August 01, 2013