I attended the first day, which was the National show; Saturday was the International event. Franktown Meadows is a gorgeous facility, with thick green, grass pastures surrounding the main arena. The announcer, Mike Moran, kept us entertained and informed as to the names of the horses & their owners, the riders, and the qualifications of each rider. 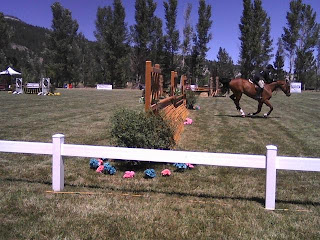 Parking was free and golf cart rides were offered to & from for those who didn't want to walk to the arena. A vendor row was set up, alongside with food choices. VIP seating was inside a large tent. Since there VIP tent wasn't being used on Friday, we were allowed to sit there. This was nice. I avoided a migraine from being in the sun.

The actual jumps were varied from simple oxers & verticals to a double. The course didn't have a water feature. We were allowed to walk the course prior to the show starting. Each jump was beautifully decorated. The course is only used twice a year, per announcer Mike Moran, which allows for a nice footing for the horses.

Friday's class had 27 entries. It was the National Hunter class, judged by Carol Dean Porter and Raizy Goffman. The total purse was $2,500. Saturday's International Derby was worth $25,000 and judged by Robert Crandall, Keith Hastings, Tammy Provost, and Linda Hough. The official show poster was done by Placer County resident Ana Luisa Rincon (www.rincoart.com ).

What is the difference between a show jumper and a hunter? Show jumpers are scored on faults. If the horse makes it around the course without knocking down any fences under the allotted amount of time, the horse/rider is judged to have a clean ride with zero faults. On the other hand, a hunter course is meant to simulate an actual hunt. Jumps are not as high: this simulates fences a farmer or rancher might have in his fields. The horse/rider combination are judged from the minute they ride through the gate until they exit. Jumps may resemble natural post & rails, stone walls, white board fencing, coops, hedges, oxers (the classic colored poles), brush, logs, and ditches.

Scores are earned for appearance, equitation, movement of the horse, Deductions are taken away for inconsistency of the jumping style, and faults (refusing a jump or knocking over a jump), three refusals or a horse/rider falling meal automatic elimination. Other major faults include when a horse kicks or bucks, canters on the wrong lead, runs out of control, lets his/her legs hang down as it jumps, keeps it's knees down when it jumps, or has a sudden or severe pace change. 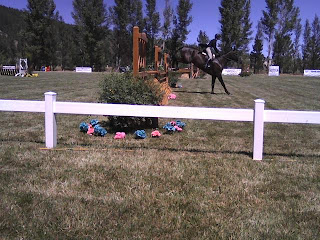 The jumps are up to three feet high in round one for the National Class and three and a half ( 3'6) in round two. The International class starts out with a maximum of four foot jumps and bumped it up to four foot, three inches (4'3) for round two. Both classes had optional, bonus jumps which can add points to the total score.

Points can also be take away for a horse's mouth staying open, hooves rubbing on jumps, not jumping in the center of a jump, uneven paces or pace changes, the horse jumping awkwardly or twisting his body, and if he horse acts unhappy (swishing her tail, pinning her ears back). The top twelve riders come back for a 'jump-off' to see who wins the class.

Most of the riders and horses that I watched (I couldn't stay for the entire day on Friday) went around the course without incident. I did witness a couple of refusals. One horse over jumped one fence to his rider's dismay, the poor girl launched off her mount's back. Thankfully, no one was hurt. 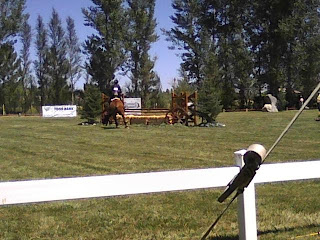 Next year, I'll get tickets in advance for the Saturday VIP event. It's not very expensive: I'll be able to watch some good horses & riders while supporting our local food bank. The staff and volunteers put on an excellent show, on time, and everyone was very friendly to boot.

A high five to all of the competitors.

Stay safe out there!
Posted by Greycliffs Chronicles at Saturday, August 03, 2013