Roads in the past were nothing like the ones we use today, but if one had a chance to jump in a time machine, a traveler would be very surprised to discover a mix of  highways and ‘deer trails’. The Romans left a legacy of paved roads through-out their Empire. Besides the land-based thoroughfares, waterways were utilized to move people, livestock, and goods. For larger loads or long distances, ships could go by sea routes following the coastline.

Were any paved highways built between towns after the Romans left Europe? Were the old roads maintained? Is it true that many of the dirt roads were little more than swaths cut out of fields?
Perhaps you might have heard “All roads lead to Rome”? Roman engineers tried to design new roads, or viae, in straight lines whenever possible. The paved roads consisted of cement, sand, stone or tile mixed together. Each new road was wide enough to allow two carts to pass one another and had ditches on the sides and milestones placed periodically along various points to let travelers know how far away they were from Rome. 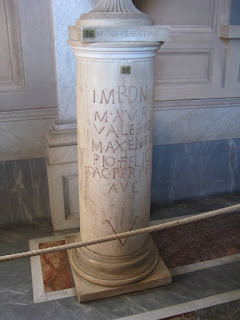 The milestones were objects of art as well as informative markers. The base showed number of miles to where it was on the actual road. A little further up the column the location to Rome was given, along with the identity of the stone carver who made the column and the Consul (military leader responsible for the area). One of the most famous roads is the Appian Way. 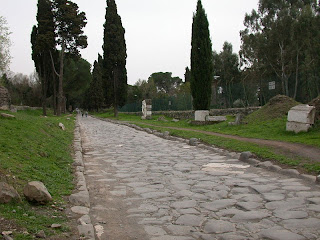 The roads in medieval Britain used London as the main hub. After the Romans bugged out of England, most of the formal road building halted in the medieval period, although there were exceptions. King Edward I tasked Roger Mortimer to improve and widen the access to north Wales in 1278. It seems good King Edward didn’t want to traipse about on deer trails during his welsh campaign. 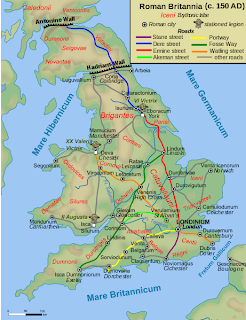 Roads were often named according to the local economy: for example, communities depending upon the salt trade had wiche as part of the town name. Accordingly, the roads were named with along the same lines. In the book Medieval Roads and Tracks, Paul Hindle explains:
“These roads were not specifically constructed for these uses but were names for the type of traffic which often used them. The roads leading from the inland salt towns (wiches), including Droitwich, Nantwich, Middlewich and Norwich, are well known, and their courses can usually be traced by ‘salt’ place-names such as Saltersford and Saltersgate.” 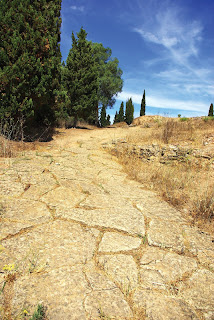 Portways marked entries to markets or ports. One portway that existed back before the conquest stretched from Northampton to Southampton via Oxford. A herepath was a route used by an army- the ‘here’ derived from Old English for army. Hindle gives the Salisbury Way herepath, which starts in Shastesbury via white Sheet Hill and Chiselbury to Salisbury. Other names from ancient languages for roads include heol, stretten, fford, and gate. Churchways gave access to a church (forth eglo, or freglos, in Wales). A corpse road was a route to a parish church with a burial ground. Finally, pilgrim routes for folk to travel to visit shrines were important roads. 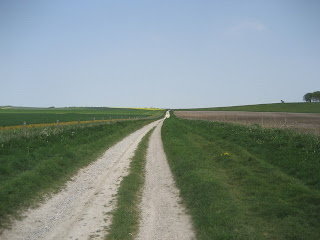 The above photo is of a herepath.

The above photo is of a corpse road.

The members of the clergy logged many miles in their attempts to spread the word of God. The medieval world boasted multiple religious faiths and most of them sent out missionaries of sorts. In addition to ministering to their flocks, members had to move supplies, messages, attend meetings, and tend to farms, wineries or other properties. Many roads were initially developed for the use of religious houses, such as the Abbot’s Way which Buckfact Abbey with Tavistock and Buckland Abbeys.
Trade routes in the country gave rise to roads. One had to bring livestock to market. Cattle didn’t do well on a boat. One could sheer a sheep, and crate chickens, but try to convince a cow to hop on a boat. Oxen were a mainstay of farmers for plowing fields, as horses were expensive to feed. The drover roads meandered along fields, following paths livestock owners would have used to get their animals to market.

After the Black Plague killed an estimated 40% of the population of the country, the relationship between the traditional feudal lord and land-locked serf changed. There just weren’t enough workers left. The common folk became a valuable commodity and demanded changes. People had more of a say in their lives, earned more coin and even did more travelling.


Crystalinks: a website with more detail on Roman roads


Stay safe out there!