Off topic for my usual posts, a few years ago an exhibition of King Tutankhamen’s treasures toured the US back in 2010. To my delight, Reno was one of the destination stops.


I have one word for what I saw: wow. I was absolutely astounded by the beauty of the items within the display. If you ever have the opportunity to see the objects, which includes His Royal Highness King Tutankhamen, in person, run  don’t walk, to get a ticket. The price of admission is worth it.


First a quick lesson on the treasures which belonged to the boy Pharaoh.  Tut was a young man when he died. His tomb miraculously was missed by raiders. In 1922, British archeologist Howard Carter and his crew found the tomb intact. A curse supposedly fell on Carter. On the day he entered the tomb, it is said that a cobra found its way inside Carter’s home in Cairo and killed his pet bird. The project was funded by Lord Carnarvon, who died after suffering complications from an insect bite. Poor Carnarvon never saw the tomb contents his friend, Howard, discovered. Even more strange, the lights in Cairo suddenly went out just as Carnarvon died as did his dog in England (it howled and keeled over dead). Then there was the man who was going to examine the mummy by x-ray: he passed away before he made it to Cairo. Three other men on site also fell dead without a reason.

At the exhibit, the antiquities were laid out behind ropes allowing for close viewing. Walking about and gazing at the items, it was very humbling. These objects were made, held, and admired by a people who lived and died before Rome was built. 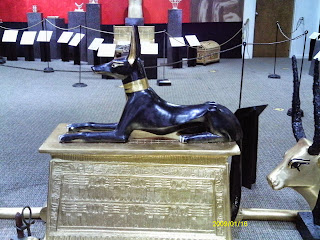 I’ll only discuss a few as the there so many on display.


The bust of Queen Nefertiti is very well known. Most pictures on show one side of her face. What I found out is the other side is either unfinished or worn out after the centuries. Regardless, the statue is still a beautiful work of art. 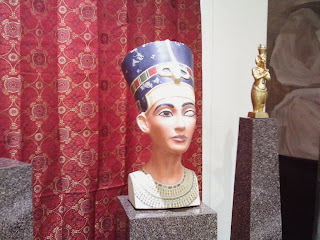 The Golden Shrine with four Tuletary Goddesses. When Dr. Carter first entered the tomb, he saw this Shrine, which housed an alabaster canopic chest. The four Goddesses protected the organs of the pharaoh: Isis (liver), Nephthys (lungs), Neith (stomach), and Selket (intestines). 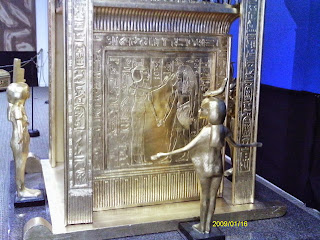 The Golden Leopard Head was with a leopard skin. It’s made of wood covered with gold, colored glass and quartz. This item was used by Tut when he participated in religious rituals. 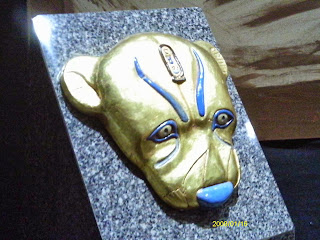 An Ibex vase is made of ivory and ibex horn. It is believed this was an item from the personal collection of Tutankhamen. I loved this piece for its beauty. 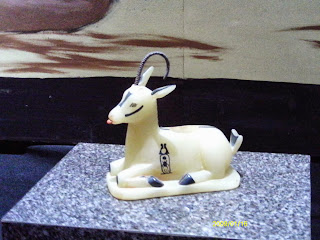 The iconic figure most people think of when the name ‘King Tut’ is mentioned, this mask is gorgeous. The Golden Funerary Mask of Tutankhamen is made of gold, lapis lazuli, carnelian, quartz, obsidian, colored glass, and cloisonné. The face of the Pharaoh is young, which is no surprise as Tut was around 18-19 years old when he passed away. A photograph can’t truly show the beauty of this item. 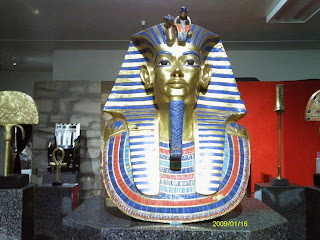 The back rest of the Golden Throne shows the pharaoh with his family. Tut is with Queen, Ankhesenanamun. The pharaoh sits on a throne as his wife anoints him with sacred oil. 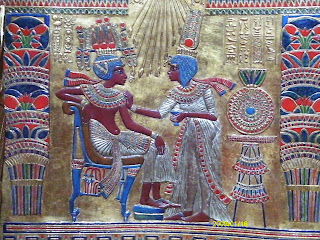 The Painted Linen Chest contained clothing, golden sandals and a headrest when it was opened by Dr. Carter. Made of wood and painted with great detail, this object shows Tutankhamen hunting from his chariot. 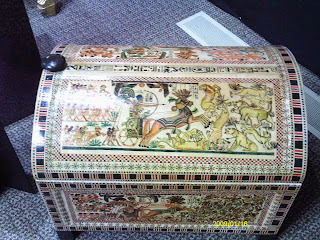 The Lion Unguent Jar is made of alabaster. I thought this was a whimsical piece. The recumbent lion has his painted ivory tongue sticking out. It is said the Dr. Carter found 350 liters of oils and other materials inside the jar. 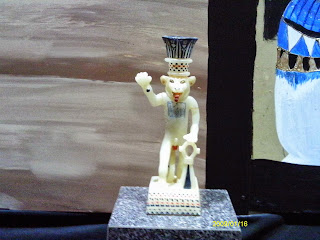 I hope you enjoyed a taste of this traveling show of King Tut's Treasures.

As always, stay safe out there!
Posted by Greycliffs Chronicles at Friday, September 20, 2013