The 17th day of Kyregat’s Moon in the year of 1181 was pleasant. A slight breeze kept the summer heat to a tolerable level. Sir Braeden du Faucione, his cousin Sir Edward, his best friend Sir Ranulf de Corbeau, and a small contingent of men were returning from the Blue Eagle forest after a successful morning hunting Trihorn. Two bucks were tied on pack-ponies, along with a forest cat which had been attracted to the smell of blood.


The knights exchanged a raucous banter back and forth, their spirits high. Braeden was happy, and why not? Life was moving onward as he planned. His wife had confided that morning she was expecting his child, the family holdings were prosperous, and the land was at peace. Braeden’s younger brother, Gregory was dead and therefore no longer a threat to him, his family, or his future. 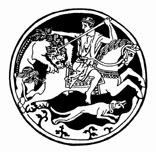 Riding through the inner gatehouse, Braeden and Ranulf exchanged quick glances. A banner displaying a white war-dog on a black field hung from the guest pole. “Wymerth is here?” they both said at the same time. The son of Faucione’s Baron and his future second-in-command leapt from their horses, Edward not far behind. The three men stampeded in to the main hall where they discovered Baron and his wife, Lady Annelle, deep in conversation with Lord Phillip and Braeden’s wife, Gaelynn. Wymerth’s men were scattered through-out the room interacting with the Faucione men.

“It’s about time you lot returned. Was the hunt successful, Braeden?” his father, Phillip inquired.


Braeden walked up to Gaelynn, giving her a polite kiss on the cheek. “Good morrow, love.” He turned to his sire, “Aye, father, two Trihorns and a forest cat. My lord Wymerth, Baroness, it is a pleasure to see you both. I hope your journey here was without incident.”


Owen Wymerth was of average height but he gave the impression of a taller man. He was fit, very athletic and never asked any task he wouldn’t perform himself. “Braeden, Ranulf, it is good to see you again. I heard excellent reports of your work in Livanya. King Gharran was very impressed with your skills and attention to details.”


Ranulf, as usual kept quiet. Braeden gave a slight smile as he replied, “We only did what we were asked, my lord. The credit goes to you, Sir.”


Owen laughed. “I see no squires standing before me; there will be no formalities standing between us, Braeden. Call me Owen. I hear King Arken speaks well of you.”


Braeden bristled at Arken’s name. Zabe’s Blood, must I never be free of the King? Is it not enough his bastard girl bears my name? “Let us not speak of His Majesty today. I would rather talk of friendship and family. How are your sons, Owen?”


A cloud settled over Lady Annelle’s face. Owen patted her hand. “Your father and I have been speaking of that very topic, but it has been a long ride. Forgive us, but my wife and I should like to refresh ourselves. I will speak privately with Phillip and you after the evening meal, if that will suit you both?”


Phillip nodded his ascent. “What was I thinking? Of course, Owen, for our oversight. Elaine, show our guests to their quarters. I’ll be in my solar going over the accounts.” The Baron left the three knights and the lady at the table.


Gaelynn waited until Wymerth had left. “Wow, I expected the man to be huge from what I’d heard about him. He seemed to be a nice man. His wife was quiet.”


“He is a wolf in sheep’s clothing, my dead. Never underestimate Owen Wymerth.” Her husband replied. “I’m going to check on the kills from the hunt.” Braeden turned and walked off.


Edward stood up. “I’ll be at the corrals, working with the yearlings if you need me.”


“I guess I’ll go check on my herbs in the workroom.” Gaelynn announced.


“I’m headed that way, I’ll walk with you.” Ranulf said. They maneuvered around the servants and knights in the room.


The sun was bright as they exited the castle, making Gaelynn squint to see. She tripped over some large rocks. If not for Ranulf grabbing her arm, she would have fallen face first on the hard-packed earth of the bailey. The contact between his fingers on her skin sent a shock wave of electricity rolling up her arm, along her shoulder and straight to her brain. The nerves fired, stopping her heart and lungs. She was paralyzed for the briefest second. Not again! How can this man’s touch set my body on fire and make the world stop? Even Braeden doesn’t do this to me. Gaelynn couldn’t look Ranulf in the eye when she thanked him, if she had, she would have seen the same reaction from the knight.


Braeden was overseeing the butchering of the game when a voice from the past startled him.


“Hello Braeden, I have a private message for you from Sir Jarvyn.”


“Flury…when did you arrive here?” Braeden tried to keep the surprise off his face. It had been almost four years since he had seen the Knight of the Sacred Sword. He couldn’t hold back. “It’s good to see you, friend!” Braeden clasped the knight in a firm grip. “Come on; let’s find a place to talk.” Braeden led the knight to the keep and up to his solar. He called for food and drink. Once it arrived, he secured the door.


“What message does Jarvyn send?”


Flury handed Braeden a letter, “It’s not important. Read it later.” He pulled Braeden close. “I missed our time in the desert. Jarvyn saw I needed a diversion from my duties.”


“I should send Jarvyn a case of Seimerkin wine back with you for his consideration, and his silence over the years. “


Flury‘s black eyes looked in to Braeden’s deepest thoughts. “Jarvyn accepted you for your skills. He also respects you as a warrior and a man, Braeden. You and Ranulf served the Sacred Swords by ridding Livanya of many dangerous enemies. King Gharran and Sir Jarvyn won’t forget that. Jarvyn turned a blind eye to our friendship as a gesture of thanks. I am grateful for Jarvyn’s actions.”


Braeden closed his eyes, tamping down the bad memories of his time in the Desert Firelands of Livanya. He still had nightmares from his time spent there. Inhaling a long breath, he let out the air to calm the demon that rest deep within his core. Ever present, just the mention of his service, the result of a vow to a Goddess, Braeden felt the fury recede. “Flury, my friend, the feeling is mutual. How long are you here for?”


Braeden grinned. “Excellent, we must be discreet. Thankfully my wife is newly with child. She does not wish to share my bed with a sick belly.”

Owen Wymerth, Phillip, and his son Braeden gathered in Phillip’s private solar. A selection of cheese, fruit, sweetmeats, and sugared candies were spread out along the table for easy access. Pitchers of fine Seimerkin wine and vorane waited in the center as beverage choices. Owen and Braeden preferred the hard liquor while Phillip liked the refined taste of the wine.


Owen filled his goblet with vorane and picked enough food to fill his plate. “My friends, I have a favor to ask.”


Phillip settled back in his chair, “Owen, how long have we known one another? Ask and it shall be done.”


Owen shook his head. “You might want to recant your words, Phillip, once you know what I ask of you.”


Throwing back the contents of his goblet, Owen wiped his mouth on his sleeve. “I want to send Bowen here in the spring to squire with Braeden. Now, I know the boy is long in the tooth to start new with a new man, but it’s necessary. Damn fool has been released by Jendavi’s service. I won’t mince words here: he’d rather play with the men than the ladies. It’s a disgrace to my name. If I hadn’t lost Drake last year, I wouldn’t care, but I need the boy to straighten up, earn his knighthood, and be the man I know he can. Jendavi agreed to remain quiet. I can’t have a scandal attached to the family name, you understand. I need Bowen to toughen up and be ready to come home to become my heir.”


Phillip turned to gaze at Braeden. “I think we can help your son, Owen. I shouldn’t worry about your standing within the realm. We all know the importance of t=your work you do for His Majesty.”


A show of emotion displayed on Baron’s face, a brief smile displayed yellowed teeth. “I hoped you would say that, Phillip.”


“I’ll take Bowen well in hand, Owen, and make a man of him.” Braeden promised. Let’s hope this kid takes after his father in the warrior arts. I’d hate to tell Owen the boy is a failure.

“How did Drake die?” Gaelynn asked Edward while they rode along the Treebridge River.


“He was returning from Dunbar when a group of mercenaries tried to rob Drake and his men. Wymerth’s son took an arrow in the throat saving a downed man.”


Gaelynn let a gasp. “Oh my Goddess, that’s terrible. Poor Annelle, no wonder she looked like Braeden back-handed her when he asked about her sons. If only Phillip had spoken up before hand and prevented the slip of the tongue.”


Edward agreed, “We couldn’t have known. Owen is a dominant man, very controlling most of the time. But I have heard he does care for his wife. Annelle favored Drake; his death has been difficult for her to handle.”


“I can sympathize, having lost a child of my own. I pray Bowen makes the most of his time here.”


Edward smiled as he replied, “I’m sure Braeden will but tough, but fair with the lad.”

"That's nice. Maybe having a squire will help relax my husband." She enjoyed the soothing sounds of the river as they moved onward. "Edward, I'm curious. Braeden was conversing with a knight I don't remember arriving with Wymerth but I swear I've seen the man before. Do you know who he is? He wears the surcoat of a Sacred Sword."

"That is Sir Flury. He is one of Sir Jarvyn's men. We often worked with Jarvyn's 'Swords during our time in the desert. Braeden and Flury struck up a friendship. He is a good man,. Flury is the designated messenger and stops here when he is in Greycliff."

"Oh, okay. I thought he looked familiar." She tightened the reins. "Shall we head back home?" I feel a change coming. Maybe I'm just being silly.

Edward followed Gaelynn, thankful she dropped the subject of Flury. I warned her about marrying Braeden. I told her he had dark secrets. Braeden is starting up his games again. I'm going to keep out of this family mess: Braeden is beginning to trust me again. I just want to live a peaceful life.

"Gaelynn, slow down and wait for me!" Edward called out as he spurred his horse to catch up to his cousin's wife. The future wouldn't be boring that was certain.