Daddy's not amused: the Princess Pirate

Its Renaissance fair season and many fairs have theme weekends. One of the favorites, thanks to the the Disney ‘Pirates of the Caribbean’ films, is the pirates days. Pirates were the scourge of the seas. These ships crewed by men who came from all areas of the world and every level of society thumbed their noses at society. But, were they all men? No, women sailed the seven seas as well as their male counterparts. Anne Bonny, Mary Read, and Grace O’Malley are well known. This is the story of a Swedish Princess who fled her palace to lead a ship: Alwilda of Sweden.

History has her called by different names according to different documents: Alvild, Alvida, or Alfhild. It doesn’t matter now; her exploits remained the same regardless of what we call her now.

Alwilda was a headstrong girl as a Princess. Her father was Synardus of Gotland. She didn’t want to tow the line her parents determined she should follow. Alwilda liked to show some skin while sunbathing (the horrors!). Her parents had enough of her teenaged angst and ordered the girl confined to quarters with a pair of poisonous snakes. Mummy and Daddy thought any suitors would be kept away by the idea of vipers guarding their rebellious daughter.

Most guys did but not hunky Danish Prince Alf. He killed the snakes and expressed his desire to marry Alwilda. The King and Queen weren’t very amused.

Neither was Alwilda. She snuck out of the palace and headed to the docks. She managed to get on a ship. Alwilda was a natural leader. She quickly became Captain. More women joined her crew and they soon became a thorn in the Baltic waters.

A call was sent out for someone to deal with this pirate. No one knew that the Captain, and many of her crew, was a woman. You see, Alwilda wore a helmet concealing her face, in addition to clothing that tried to disguise her true self. 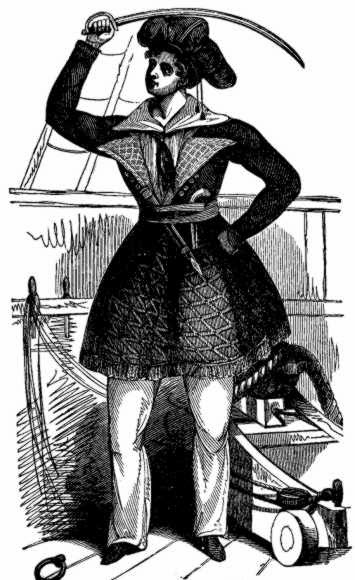 Prince Alf set out to stop the pirate. His ship engaged Alwilda’s and a fierce battle ensued. Alf and Alwilda fought one-on-one and she was defeated. When Alf ordered her helmet removed, no one was more surprised than the Prince to discover the true identity of the pirate Captain. The legend says Prince Alf told Alwilda he’d been looking for her because he couldn’t get her out of his mind. She fell for the story and married him that day on board the ship.

The couple returned to Denmark where they ruled as King and Queen. It was recorded Alf and Alwilda had one child, a daughter called Gurith.

for more reading about women from the medieval world:

The Pirates Own Book: Authentic Narratives of the Most Celebrated Sea Robbers
by Ellms, Charles
1837 Marine Research Society

stay safe out there!
Posted by Greycliffs Chronicles at Thursday, May 29, 2014