A Thing to Behold: The Holy Grail

...And “O my brother Percivale,” she said
“Sweet brother, I have seen the Holy Grail:
For, waked at dead of night, I heard a sound
As of a silver horn from o’er the hills
Blown, and I thought, ‘It is not Arthur’s use
To hunt by moonlight;’ and the slender sound
As from a distance grew
Coming upon me-O never harp nor horn,
Nor aught we blow with breath, or touch with hand,
Was like that music as it came; and then
Stream’d thro’ my cell a cold and silver beam,
And down the long beam stole the Holy Grail,
Rose-red with beatings in it, as if alive,
Till all the white walls of my cell were dyed
With rosy colours leaping on the wall;
And then the music faded, and the Grail
Past, and the beam decay’d, and from the walls
The rosy quiverings died into the night.
So now the Holy Thing is here again
Among us, brother, fast thou too and pray,
And tell thy brother knights to fast and pray,
That so perchance the vision may be seen
By thee and those, and all the world be heal’d.”

From ‘The Holy Grail’ chapter, Idylls of the King

The Cup of Christ, or the Holy Grail, has been a subject of wonder since medieval times.  Legend says that the Cup was used during the Last Supper. Later, Joseph of Arimathea caught blood dripping from the crucified Christ within its recesses. After the death of Jesus, Joseph and his family either traveled to England, or Joseph gave the Cup to his brother, Bron, who made the journey to England.


The Grail quest was put in writing by a knight from Burgundy, Sir Robert de Boron about the same time Chretien de Troyes was writing his romantic takes of King Arthur.  Prior to that, stories of Arthur had been documented by Geoffrey of Monmouth although Geoffrey didn’t mention Guinevere or Lancelot. A Welsh collection of tales called the Mabinogion also made the circuit. Another man, the German Wolfram von Eschenbach wrote about the Quest in his book, Parsival . Sir Thomas Mallory had three knights working together to find the Grail: Galahad, Percival, and Bors. The triumvirate finds the Cup and return with honors to Camelot. On their return, the Siege Perilous allows Galahad to take a seat. Previously, any knight attempting to sit n the marked chair dies. Galahad’s name is inscribed in the chair, securing the knight a place at the Round Table.

The search for the Grail was one of a spiritual nature. In Chretien’s version, Percival was the primary seeker of the Holy as was Eschenbach’s tale in early versions. At some point, the legend changed to Galahad, son of Lancelot and Elaine (daughter of King Pelles) as the primary treasure hunter.  Other writers attributed the Grail quest to Sir Gawain, Sir Lancelot, or Sir Bors.

Percival was the original Grail seeker. He first comes in the story as a boy living in a forest with his mother. He decides to journey to Camelot, where he has many adventures including killing of the Red Knight. Taking on the Quest, Percival comes across a castle on the way to see his mother. The occupant, an old man, gives him a sword. Percival neglects to ask about the quest or the Grail. He goes t sleep and wakes up in a deserted castle. He loses heart and wanders for five years until he returns back to the castle and this time asks about the Grail. The old man, really the Fisher King, had been wounded by the sword he gave Percival. This sword was magicked to wound any man not worthy of the Grail, who held it in some versions or by another knight in others. Either way, Percival is able to heal the Fisher King and succeeds him at his death.

“See ye no more? I, Galahad, saw the Grail,
The Holy Grail, descend upon the shrine:
I saw the fiery face as of a child
That smote itself into the bread, and went;
And hither am I come; and never yet
Hath what thy sister taught me first to see,
This Holy Thing, fail’d from my side, nor come
Cover’d, but moving with me night and day,”

From ‘The Holy Grail’ chapter, Idylls of the King 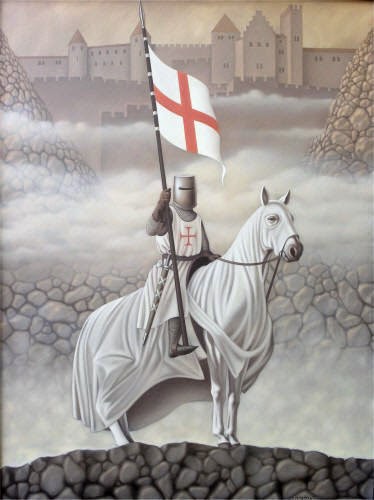 Before King Arthur sent his Knights of the Round Table on their quest to find the Holy Grail, he put on a tournament. Sir Galahad fought bravely and won his bouts. Galahad set off and came upon the realm of King Bagdemagus. Bagdemagus told Galahad to wait in the chapel while he prepared for their fight. The young knight found a white shield with a red cross (reminiscent of the Templar Knights). During the test, Galahad wounds the King. Asking about the shield, Bagdemagus explains that the protective device once belonged to Joseph of Arimathea. Galahad goes on while the King suffers from his injuries. This places his kingdom in dire straights (drought, plague, and general devastation). Galahad eventually finds the Grail Spear and heals the king.  Resuming his travels, Galahad comes upon a tournament and participates where he unhorses & wounds Sir Gawain. Gawain concedes his seeking of the Grail is over as he has been deemed not worthy.

Meanwhile, Sir Lancelot was travelling through a forest when he came upon a chapel. Curious, he looked for a way inside but was unable to find one. Discouraged, he untacked his horse, lay down his sword, and went to sleep next to a cross outside of the building. While Lancelot was sleeping, two knights rode up and mused about the identity of Lancelot. They determined he was stained by his sins, the reason for him not being allowed in the church. The two knights left the sleeping man. Lancelot had overheard the conversation and had an epiphany. He conceded his checkered past was preventing him from finding the Cup and gave up his quest. 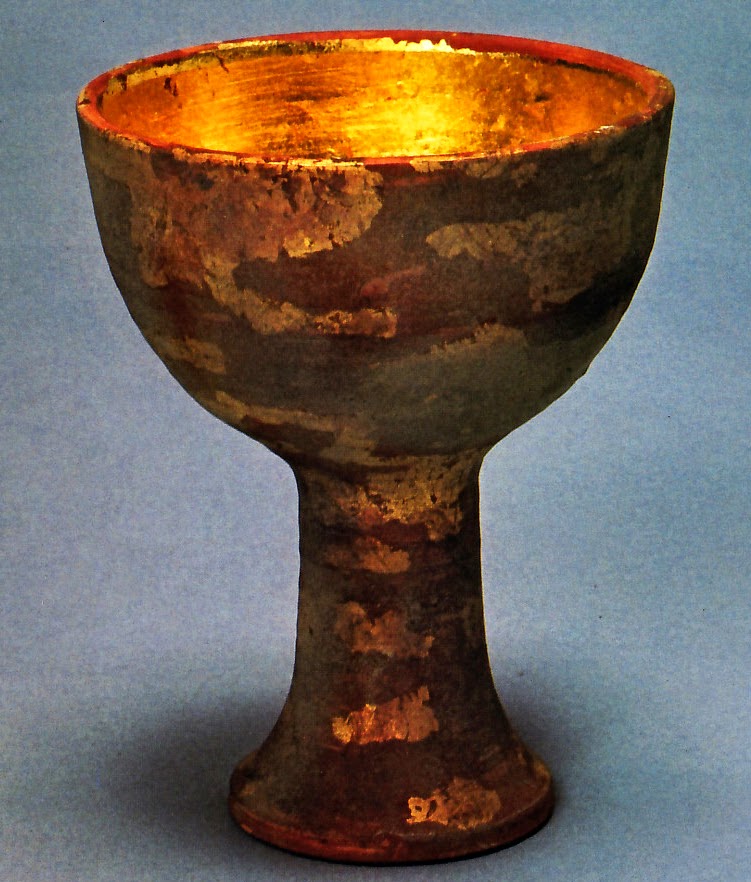 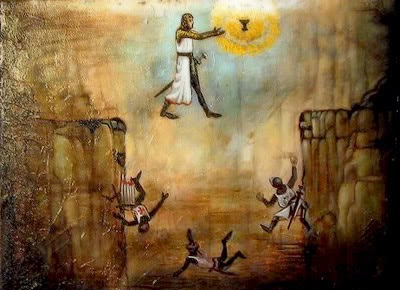 Is the Cup a real item? Is the grail an actual cup? It has been suggested that the Holy Grail was a bowl, not a cup. It was reputed to bestow health and long life on any person who drank from it as attested in the movie, ‘Indiana Jones and the Last Crusade”. The Cup was linked with the Knights Templar. Legends of the Templars speak of two possibilities to the Cup’s location: Rosslyn Chapel in Scotland or the New World, buried at Oak Island (Nova Scotia). A church in Spain claims to have the Grail of legend, and displays a gilded cup in a protected cabinet. The Templars wore white surcotes with a red cross: and this is reflected in the white shield taken from the chapel by Percival. 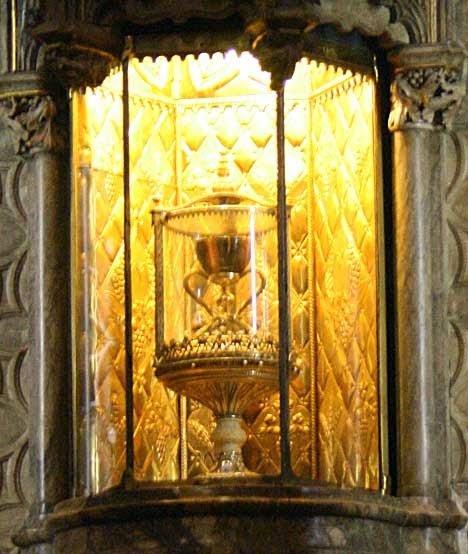 The quest for the Holy Grail didn’t save Arthur’s Kingdom. His men disbanded in their search, it took a civil war with Mordred to bring them back. Mordred was killed fighting Arthur who took a mortal wound. 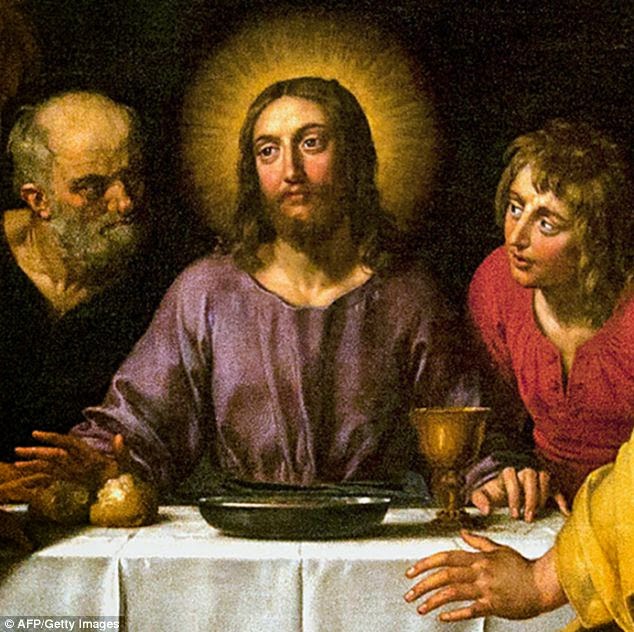 Throughout the ages, people have been enthralled with the tales of Arthur and his knights. Perhaps one day, the King will return as foretold and we will learn the truth. Until that day, we must be content with reading the stories of old, and new, authors fascinated with the subject.

For more reading on King Arthur, the Grail, and his knights see:

Stay safe out there!
Posted by Greycliffs Chronicles at Thursday, September 25, 2014