Hit them with the pointy things: A history of Archery

“The wild beasts quivered at the cry of the questing hounds;
Deer ran though the dale, distracted by fear,
Hastened up the high slopes, but hotly were met
By the stout cries of the stable, staying their flight.
They let through the antlered harts, with their handsome heads,
And the brave bucks too, with their branching palms,
For this fine lord had forbidden, in fermisoun time
That any man should molest the male of the deer.
The hinds were held in the valley with hey! and ware!.
The does driven with din to the depths of the dale.
Then the shimmering arrows slipped from the bowstring, and slanted,
winging their way from every tree in the wood.
Their broad heads pierced the bonny flanks of brown;
The deer brayed and bled, as on the banks they died.”

from the fourteenth century English poem, Sir Gawain and the Green Knight

Bow and arrows have been around for a long time. It is reported that cave drawings dating back to 20,000 BC have been found in Spain. Parts of archery equipment, shafts estimated to date from 9000 BC and flint heads back to 25,000 BC have been discovered by archaeologists. In 1991, a body of an ancient male with 14 arrows was found in the Swiss Alps. The re-curve bow was developed by the Assyrians and the weapon perfected by the Hittites for use by chariot men. In 1363, a law was passed in England requiring mandatory practice of archery by the common folks on holidays & Sundays. It is said that Confucius was an archery instructor and who can forget the legendary Robin Hood and his Merry men who were primarily known as bowmen. 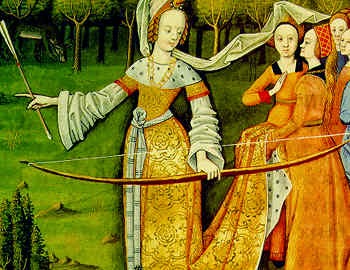 The Norwegian king, Harold Hardrada and the Norman king, William Rufus both met their fate at the end of an archer’s tip.  Harold killed by an arrow to his eye while William‘s death might have part of a conspiracy by his younger brother, Henry (the future Henry I). The Bayeux Tapestry depicts archers fighting for William at Hastings. Italian horse archers played key roles in 1080 at Durazzo against Byzantine. In 1053, the Normans again overcame the odds and bear the Lombards at the battle of Civite using bowmen.

Archers were often commoners. The men provided their own equipment. Most didn’t have armor, using padded jerkins and a helmet. They would carry a dagger or sword when the fighting became up close and personal. Men carried spare arrows in quivers, and sometimes were known to stick extra arrows in the ground in front of them for easy access. The archers took advantage of arrows shot at them (missed) by picking up the projectiles off the ground. This was the case at Crecy, where the odd man would dash out of line to gather arrows on the field.

The arrows, or missiles, were important parts of an army. Mongolian horseman from the steppes had to be the ultimate masters of the bow.  The nomadic tribes used skirmish techniques, gradually wearing down their opponents on their light horses. This strategy was used by Genghis Khan when his men came up against the Hungarian at the Battle of Leignitz in 1241 AD. After the Mongolian horse archers hit the Hungarians with fast strikes, the nomads advanced their heavy cavalry. The poor Hungarian Army was defeated when the traditional knights couldn’t hold off the Mongolians after a smoke screen helped confuse the men. 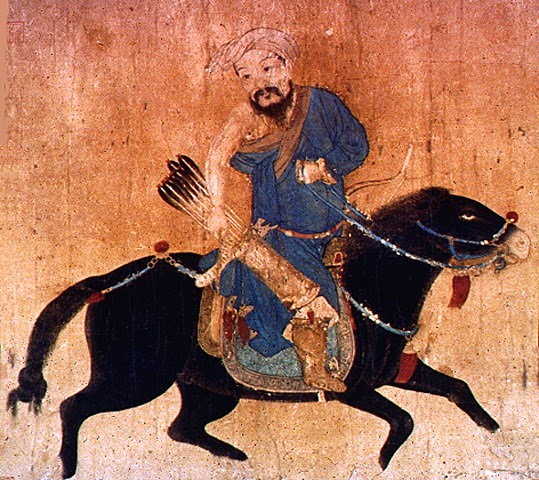 The English long bow had a major impact on the French knights during the Hundred Years War. One battle, fought from ships, occurred at Sluys, 1340. The French King had up to 500 crossbowmen while the English up to 4000 archers. English ships moved along the River Zwyn to confront the French. Hoping to blockade the invaders, the French chained their ships together. It was a fatal mistake.  English longbow man rapidly fired their arrows at the French. After the ships came together, the English infantry overcame the French in a melee with assistance from Flemish ships coming form the opposite direction. At their peak, up to 42,000 arrows per minute were shot were at the Battle of Crecy by English longbow man. Archers were also part of sieges, both from above and below. ‘Firestorms’ of lit arrows would be aimed to light siege equipment on fire. Examples of siege warfare using arrows can be seen in ‘Kingdom of Heaven’ and of arrows in battle in ‘Braveheart’. 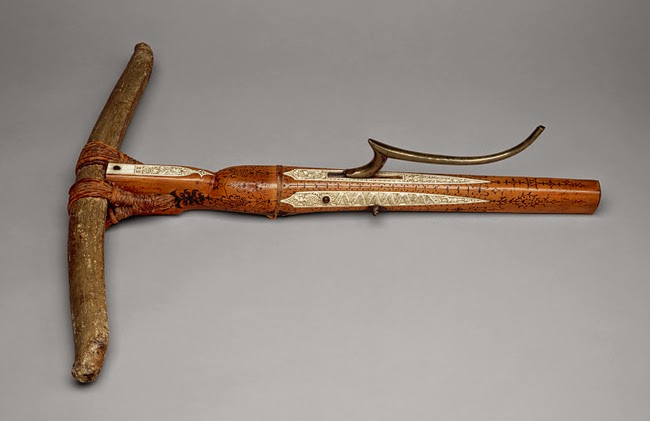 The crossbow was invented probably around the 5th century. The weapon was referenced by Sun Tzu in his epic book, ‘The Art of War’. and used by Chinese warriors as far back as 228 BC. Crossbows required less training than traditional bows. The disadvantage was having to re-cock the bolt trigger. Arrows fired from cross bolts could pierce armor. The shooters would occasionally use a ‘Pavise’, or large shield, for protection. The men could stand behind the Pavise to re-load. 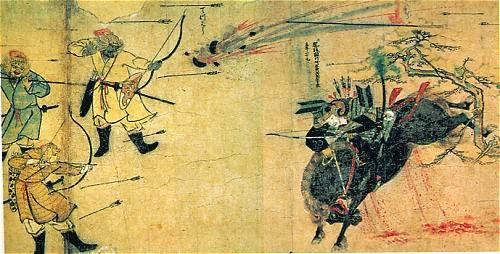 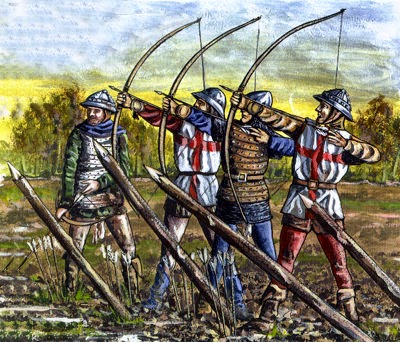 The invention of gunpowder heralded the end of traditional fighting using armored knights and archers. No shield could defend against cannons or guns although archery didn’t go away. Bows & arrows were used in hunting and sport. Tournaments included archery contests – one famous one was that of Robin Hood in disguise. The Antient Silver Arrow archery contest has been held continously since 1673 in Scorton Village, North Yorkshire, England.

According to an article posted on EHow, about archery:

Of the three bow types, the long bow is the most traditional and the simplest. It is one solid piece of wood consisting of the lower (bottom) and upper (top) limbs, with the grip in the middle. The ends of the limbs have a string groove where the bowstring attaches. The recurve bow has the same parts as a long bow with an additional middle section called a riser. The riser holds the grip, a sight window used for aiming, and arrow rest that supports the arrow when shooting. This eliminates the need to hold the arrow against the bow with your finger as with some longbows. Compound bows have the addition of pulleys affixed to the end of the limbs that support a cable the bowstring attaches to.”
“Arrows consist of four parts: the shaft, nock, fletching and head. The arrow shaft, or the body, can be made of wood, fiberglass, aluminum or carbon. The shaft's length, diameter and stiffness must correspond to the bow and archer for maximum effectiveness. The nock is at the back or the arrow and has a split channel in the middle where it snaps onto the bowstring. The fletching is a group of vanes attached to the back of the shaft. Fletchings originally were feathers but now usually are made of plastic. The fletching causes the arrow to spin while in flight, stabilizing it so it will fly true. The arrowhead attaches to the front of the arrow, usually with a screw-in insert, allowing the arrow to penetrate the target.”
“While there are numerous styles of arrowheads, there are five basic types, each suited to a specific purpose. Field points resemble a bullet and are used for target practice. Blunt points are made of hard rubber with a flat or rounded front and are used for hunting small game. Fish points have wire springs attached to field-style points that keep it from falling out of the fish. Broadheads have at least two large cutting blades and are used for game larger than the size of rabbits.”
“The bowstring runs between the ends of the bow’s limbs and has four parts. The loops at the ends attach the string to groves in the limbs of a longbow or recurve, or the string nocks on the cable of a compound. The serving is the material wrapped around the middle of the bowstring that protects the sting from wear from the friction the arrow’s nocking point causes while leaving the string during shooting.” 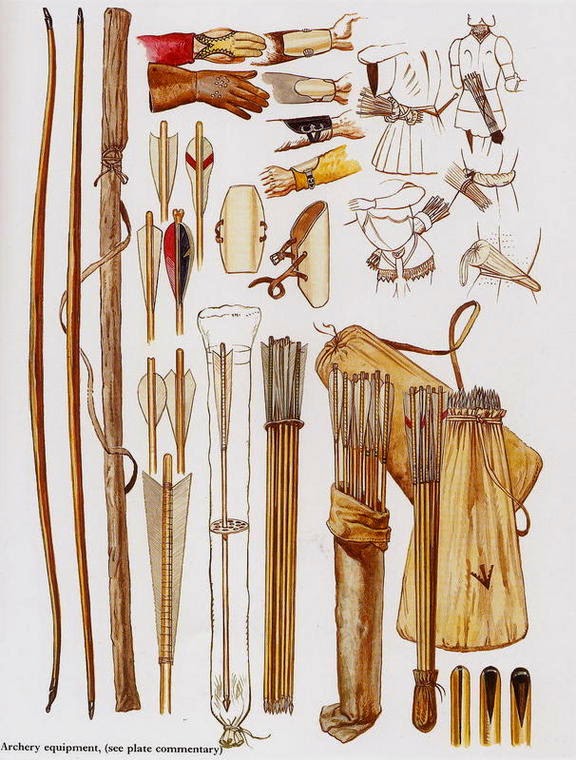 Today Archery has gained more popularity due to the ‘Hunger Games’ books. Actress Geena Davis is an accomplished archer. Archery is taught in schools across the world. Hunters still draw back and shoot at game, both big and small, with arrows.

for more reading, see the following: