Houses of the Lord: Monasteries in England


In the year 300, an Egyptian called Antony decided to lead a life of prayer. He said goodbye to the village and his family and became a hermit. He was considered a monk by those who knew him. Others soon followed his example, swearing celibacy and devotion to the Christian God in 320 by establishing monasteries. The men and women followed renunciation (the act of giving up all the pleasures of regular living) as part of their daily regime. Monasteries spread through the Middle East and eventually to around the world. One man, St. Basil even wrote down general rules for the lifestyle. The Rule of St. Bail became the rule of thumb for monasteries after he died in 379. One of his rules stated that becoming a hermit was too self-centered. In his words:

“The solitary life has one aim, the service of the needs of the individual. But this is plainly in conflict with the law of love. Whose feet then wilt thou wash? Whom wilt thou care for?” 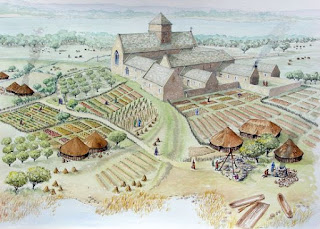 The first monastery was built in Ireland in Clonard, followed Canterbury (England in 597), and Iona (Scotland in 563). Canterbury was Benedictine while the Scottish and Irish establishments were of Celtic origins. Soon, other monasteries and abbeys sprung up.

What were the different orders of houses? The Benedictines hailed back to St. Benedict, a monk of Italian descent, with their order established around 515. The Cluniacs started about 910, taking the name from the abbey of Cluny. The Cluniacs spent much of their time in prayer. The Carthusians showed up in 1084 in eastern France. Their home was referred to as a Charterhouse and the order was very strict with the members, requiring solitary prayer and work. The Cistercians arrived in 1098 wearing white robes. They tried to reform the Benedictines and followed the Virgin Mary. Next up were the militaristic orders: The Templars and Hospitallers in 1120. We all know what happened to the Templars in 1312. The Hospitallers weren’t stupid: they confiscated much of the former Templar property. The Augustinians were established in 1100 and followed the writing of St. Augustine of Hippo. In 1131 the Gilbertines were founded in England by Gilbert of Sempringham. He had separate buildings for men and women. There were others, but these were some of the more common groups.

In addition the the major orders communities of friars, or the medieval equivalent of preachers, became popular. The Franciscan Friars preached the extreme version of poverty and survived by begging. The Franciscans were called the ‘Grey Friars’ in England. The female counterpart of the Franciscans was the Poor Clares. Spaniard of St. Dominic founded a new off-shoot of the Franciscans, calling his group the Order of Preachers. They wore black habits and were known as ‘black friars’ or Dominicans. He emphasized preaching.

As the houses became pillars in the communities, better, sturdier structures of worship were built. Building seasons depended upon good weather, so it made sense that skilled craftsmen and laborers could ply their trades during March through October, during the daylight hours. Elaborate stone carvings still exist in churches and cathedrals to this day. Amazing stained glass windows along with beautiful woodwork inside the buildings stands as testimony to the artisans of the past. Later structures were built with private rooms instead of dormitories. Walled gardens protected kitchen gardens and sturdy barns held livestock. The churches were centers of learning and known for their libraries. 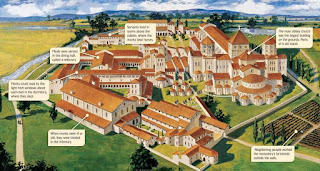 The daily life at an abbey or monastery was structured with chores, prayer, and service. In addition to serving God, housekeeping duties, food preparation, gardening, laundry, and other special duties need to be taken care of. Members tended to the local populace, gave alms to the poor, provided sanctuary, may have offered schooling to those who could pay, performed missionary work, copied manuscripts, and even worked on personal science projects in the areas of medicine or horticulture.

The religious centers were often targets for attacks. In June of 793, the first documented raid by Norsemen (Vikings) took place at Lindisfarne. The Viking raiders killed some of the monks in residence and stole the treasures. It was the beginning of the raids that were to take place for many years and the reason many of the houses were abandoned, except for monasteries in the kingdom of Wessex.  Eventually, the great religious centers were rebuilt. When William conquered England, he relied on Lanfranc, an Italian monk, to give advice. Lanfranc was appointed the Archbishop of
Canterbury.

During this time, the Benedictines and Cistercians rose to prominence. Religious houses were under patronage by wealthy nobles. Gifts were seen as investments in one’s soul: it guaranteed the monks or nuns would pray to God on one’s behalf. Sins could be bought off for the right price. Relics of saints were sought by the churches because the items brought in pilgrims. No one could honestly prove that the vials of blood or bones were truly from the said saint, or that the piece of wood was from the True Cross, but the people believed and that was all that mattered. For example, the Cistercian Abbey in Hailes was said to have a vial of Christ’s blood.

When King Henry VIII was denied a divorce by the Pope, he broke away from the Catholic Church. The King made himself head of the Church of England. All clergy were ordered to take an oath to the new Head of the Church of England in 1534. Those who refused were executed. In 1535 Henry ordered the dissolution of the monasteries after Cromwell claimed the clergy were abusing their status. The buildings were ravaged for their treasures, the structures damaged and the personnel kicked out.  The King wasn’t completely heartless: he allowed a pension to the monks and nuns to be paid with housing. Only a few properties remained intact for use: those that survived included Westminster, Rochester, Canterbury, Ely, Norwich, Carlisle, Durham and Winchester. 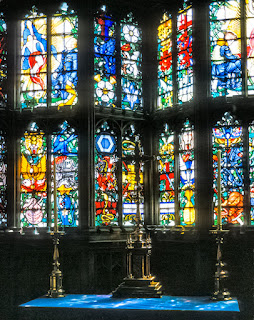 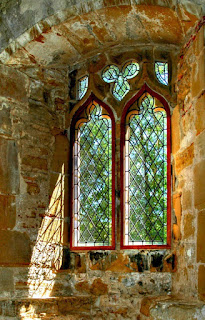