Feuding Knights in Paris and a new movie

This is a long post. I hope you bear with me.

First, I want to make a quick statement about movies made not books. For the most part, the books are usually better. No director, producer, or actor can honestly impart a real feelings or thoughts that the writer put into the pages of his or her book. Hollywood always wants to change the story to suit their agenda. Sometimes it is because the book is too long, as in “Gone With The Wind” (and what happened to Scarlet’s other children?) or T.H. White’s “The Once and Future King” (“The Sword in the Stone” is part one of the novel). Sometimes stories are sanitized, aka Disney-style (read the original versions of Bambi, The Little Mermaid, or Mary Poppins). The author of “Forest Gump” was so upset with how the movie came out, he wrote a sequel in such a way he knew no one would make a movie out of it.


Now, onto the primary topic: a movie about a duel between two men in 14th century Paris.
Ben Affleck and Matt Damon have recently announced their production of a new film, “The Last Duel”. The movie will be based upon a 2004 non-fiction book written by Eric Jager. 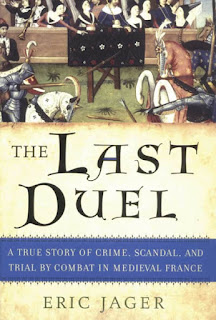 So, let us start with the controversy of this announcement. The morons of the MeToo# movement have already decried this movie because it “is all about the rape of a woman”. <big sigh here>
A co-worker gave me a bookmarker this year for my birthday. It reads: never judge a book by its move.

How true! Those idiots probably NEVER even heard of the title, much less READ the book until Affleck and Damon made their statement. The moment I heard about I just shook my head. When the book was first published, I had purchased a copy. Anyone who has followed my blog knows how I enjoy reading material about the medieval period and knights in particular. This book was right up my alley.

The alleged rape is a small part of the entire story. In fact. It is about two friends who have a major falling out when still squires. You must understand that during the time period in question, men could be squires for their entire lives. Sir Jean de Carrouges (the man who petitioned for the duel) and Jacques Le Gris (the squire and godfather to Carrouge’s son) was the alleged suspect along with a companion named Adam Louvel.

The book chronicles the downfall of Carrouge’s family who fought with William the Conqueror. They were Norman nobility who were gradually losing status. Le Gris was a rising star, educated as a clergyman and even served King Charles VI. Le Gris was gifted lands by the man they both swore fealty to, County Pierre. The two men had multiple judgments against one another that went beyond Count Pierre’s authority all the way to the Royal Courts. Their names were known to the King. Le Gris and Carrouges’ friendship soured as Le Gris gained lands and fame while Carrouges couldn’t catch a break. Sir Jean even lost out on a post his family had held for generations. He was vocal in blaming his former friend and it didn’t help that his first wife and son died. His second wife, Margaret, was born to a family of a traitor to the Royal family. That blemish was ignored as Margaret was the sole heir to her father. She brought land and money to the marriage. 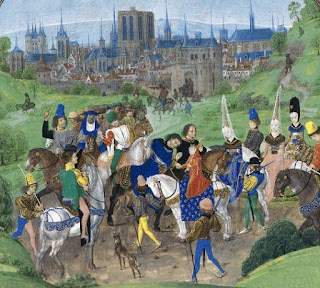 Circumstances surrounding the assault were murky, at best. Carrouges was away the day of the alleged rape.  His mother, Dame Nicole had answered a call at a nearby town and taken all but one of the household servants with her. Margaret had only her personal maid, who for unknown reasons, made herself scarce instead of attending her lady, leaving no witnesses to the crime.
By the time of the event, Jean had been knighted for his service to the Crown while Le Gris was still held the rank of a squire. The enmity between the two was apparent to everyone. Jacques was working on his knighthood. Both men went through the process of Royal Court justice, even though Jacques attorney advised him to seek the process via the ecclesial system. Thee Royal Court eventually granted the request for a duel to the death (in other words, to be judged by God). It was more than two men fighting: if Carrouges lost, Margarite would die by being burned ion a stake for filing a false claim of a capital crime. 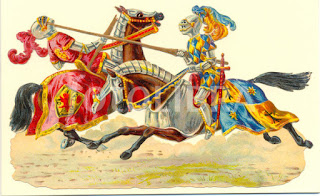 It was a big deal.

The permission was granted when the French Parliament couldn’t determine guilt or innocence one way or another.  The fight would start on Saturday, December 29, 1386. The two men would fight until one of them was dead. The decision of the Court split Paris into two groups: one routing for Jean and the other for Jacques. A special field of battle (the lists) was set up at Saint Martin des Champs. The wall around the field was made so that combatants could leave once they were inside. Before the battle started, Jacques was knighted: they had to be equals in the eyes of God. The fight was bloody. The rules of chivalry were thrown out. Not even the knight's horses were safe and for any of you who know anything about knights, that is a major deal! In fact, the majority of the rules were for the spectators (they basically had to sit down, shut up, and watch). 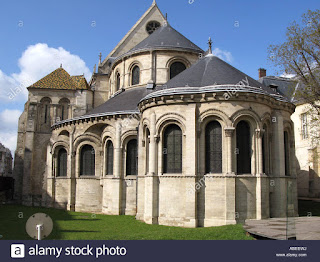 How did it end?

Well, you will either have to read the book (my recommendation) or wait for the movie.

What do I think happened? Oh no, I'm not spoiling the ending for you. Honestly, I think Le Gris did have relations with Margaret, but it wasn’t without her consent. The lady didn’t have any bruises, cuts, or even (according to Dame Nicole and different servants) act as if anything was wrong the next day. Is it possible Le Gris and Margaret had an affair and the she became pregnant? After all, she had failed in five years to get with child with her husband. Carrouges was considerably older than his wife. He’d only had one child with his late wife. The timeline supports that theory and a confession by Margaret to Jean would have given him the ammunition he needed for revenge to his long lists of slights.

I hope Hollywood doesn’t put a spin on this story to go along with the pc movement. We can’t equate our modern thinking, morals, and lifestyles to those of the past. All we can do is review their history and not repeat their mistakes.

Until next time, stay safe and keep reading!